Disney Has Just Announced Something MAJOR And We're Super Excited!

We can’t contain our excitement!

Any Disney news is good news according to all of us here at Her Towers, but the announcement today by CEO Bob Iger is pretty darn brilliant.

According to Iger, Star Wars-themed lands will be opening in Walt Disney World, Florida and Disneyland in Anaheim, California.

“We’re building a 14-acre Star Wars land at Disneyland,” he revealed according to Variety.

Coming soon to a Disney Park not so far, far away: #StarWarsLand. pic.twitter.com/hkdYooAqLU 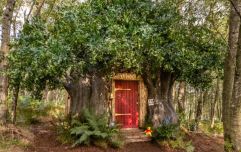 END_OF_DOCUMENT_TOKEN_TO_BE_REPLACED

“We are creating a jaw-dropping new world that represents our largest single themed land expansion ever.

“These new lands at Disneyland and Walt Disney World will transport guests to a whole new Star Wars planet.”

popular
Hang on, Tasha and Coco know each other already?
Suzanne Jackson taking a "step back" from her business
Tonight's episode of Love Island will be extended due to "explosive" recoupling
One Tree Hill star Bevin Prince’s husband dies after being struck by lightning
Reports of image based sexual abuse involving 200 women investigated by Gardaí
WATCH: Gemma is left fuming in tonight's Love Island as Luca kisses another girl
Ronan Keating worried about son Jack as he is "quiet" on Love Island
You may also like
1 month ago
Pirates of the Caribbean creators not ruling out Johnny Depp's comeback despite trial
1 month ago
Zac Efron has just teased a High School Musical reboot
3 months ago
Disney's Irish Disenchanted scenes set to be reshot after mixed reviews
3 months ago
WATCH: Sebastian Stan on his "terrifying" new movie, Fresh
4 months ago
A new tell-all Pamela Anderson Netflix documentary is coming
4 months ago
The first photos of the brand new Disney cruise ship are here
Next Page