Dublin fire brigade delivered a baby in a car park this evening.

According to the fire brigade's Twitter account, the fire crew from Kilbarrick delivered a baby boy in a car park on the Malahide road.

They then sent both the mother and her newborn on their way to the hospital.

Our fire crew from Kilbarrick have just delivered a baby boy in a car park on the Malahide Road. Mother & baby on way to hospital 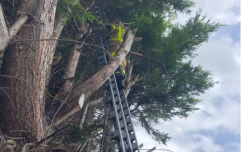 END_OF_DOCUMENT_TOKEN_TO_BE_REPLACED

The tweet has received over 180 likes already, with users expressing their congratulations to both mother and baby boy on the social media site.

One user said "well done" to all the crew.

Another said that the mother delivered the baby herself, but that the fire brigade were a "great support."

Dublin fire brigade responded agreeing, saying "mum does the work, we just assist!" and a thumbs up emoji.