Food for Thought: The Story Behind the Margherita Pizza

We eat them, we drink them, we savour them and they make our mouths water, but where exactly did they get their name?

There are hundreds of foods and drinks out there with a title attached to them but did you ever wonder about its history?

This week we’re bringing you the story behind the much-loved Margherita Pizza.

When it comes to pizza, Italians are famed for their love of thin and crispy crust and the Margherita Pizza is a favourite across the world.

END_OF_DOCUMENT_TOKEN_TO_BE_REPLACED

Back in the 16th century, flatbread was known as a pizza. It was seen as dish of the poor and was sold in the streets. For a long time, it was rare to see it even considered as a kitchen recipe staple.

END_OF_DOCUMENT_TOKEN_TO_BE_REPLACED

In June 1889, the Queen of Italy, Margherita of Savoy, and her husband King Umbero I, noticed peasants eating large, flat breads with various and colourful toppings.

Curious as to what they tasted like, the queen asked to bring forth one of the pizza breads.

The Queen fell in love with the bread and its taste and would regularly eat it in court (though it was seen as a peasant food).

In her honour, legendary Neapolitan pizzamaker Raffaele Esposito created the "Pizza Margherita" for the Queen. 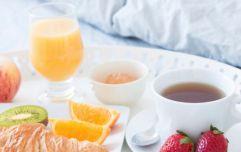 END_OF_DOCUMENT_TOKEN_TO_BE_REPLACED

The pizza was garnished fittingly with tomatoes, mozzarella cheese, and basil – the colours to represent the Italian flag.

And so, the Margherita Pizza was born.

Though there are varying reports from old recipe books with mentions of pizzas with the same toppings, there is no doubt that the story with Queen Margherita is the one that made the topping so popular.

popular
John McAreavey reveals baby number two is on the way
Laura Whitmore addresses negative Love Island comments
Top tips for keeping your fake tan on for longer as the weather heats up
Coco Lodge has released her Love Island audition tape
Congrats! Ailbhe Garrihy is expecting her second baby
Upcoming X Factor documentary to expose "bullying and exploitation"
Saoirse Ruane's mum shares hopeful update after she gets her first blade
You may also like
2 weeks ago
McDonald's increases menu prices due to rising inflation
2 years ago
Drinking coffee can help ease pain in some cases, according to research
2 years ago
Nutritionist says eggs are an essential breakfast food and we're okay with that
2 years ago
Eating a banana for breakfast is actually a pretty bad idea
2 years ago
Got your period? Try to avoid these foods as much as possible
3 years ago
This is why you should avoid ordering soup when out for a meal
Next Page