Footage of couple accidentally surprise proposing to each other is honestly too much, like

There are plenty of different ways you can propose to a person.

You can get down on one knee. You can ask them over a roast chicken dinner. You can hide an engagement ring in their dessert and hope they don't absolutely choke on it before agreeing to spend the rest of their life with you.

END_OF_DOCUMENT_TOKEN_TO_BE_REPLACED

Another way you can propose to someone is by bringing them to the zoo and getting someone to take a video of you two while you pop the question.

And then, at the exact same time, the person you were proposing to can turn around and reveal that they were also going to propose to you at the same time.

END_OF_DOCUMENT_TOKEN_TO_BE_REPLACED

The above may not seem entirely plausible but it has actually happened at least once so we're just going to go with it.

Last week, Jessa and her girlfriend Becky went to visit Memphis Zoo and Becky suggested the pair get a pic.

The pic, however, was a video, and Becky produced a ring from behind her back and asked Jessa to marry her. 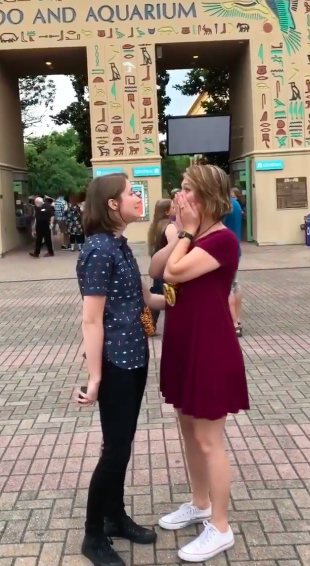 Jessa, however, didn't say yes. Instead, she rooted around in her bag and produced a box revealing that she was also planning on proposing to Becky that day. 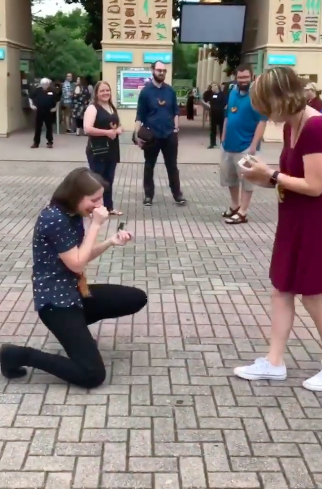 This isn't the first time this has happened either.

A few months back, couple Tori and Berkley were playing Pictionary when they both accidentally surprise proposed to each other too.

It's absolutely mad that people can surprise each other with proposals at the same time when most of us can't even get a text back, isn't it?

Anyway, apparently Jessa and Becky plan to get married this summer. Fair play to the gals.

popular
Deborah James "scared to go to sleep" as she receives hospice care
Irish mum shares "harrowing" experience after kids almost abducted in Turkey
Wagatha Christie: Rebekah Vardy storms out of court just 30 minutes into final day
Final episode of Neighbours to air on Irish TV in August
This Is Us stars say goodbye to show after emotional final episode
Tributes paid after Love/Hate actor Stephen Clinch dies aged 52
Airport passengers left furious as queues stretch all the way to car park
You may also like
1 week ago
A couple in India has sued their son for over €600,000 for not giving them a grandchild
1 week ago
Woman shares genius hack for making any bra backless
2 weeks ago
TikToker's code hack for buying cheaper clothes online goes viral
2 weeks ago
'Coastal grandmother' is the viral 2022 fashion vibe you did not see coming
1 month ago
Women are sharing pictures of their saggy boobs on social media – and here's why
1 month ago
"That money could have saved lives elsewhere" – social media reacts to Brooklyn and Nicola's wedding
Next Page