"One for everyone in the audience".

Fifty-seven years from when that iconic phrase was first uttered by Gay Byrne and it's still synonymous with Friday nights spent in your childhood home.

Today, the news of Gay's passing was met with great sadness and he has been described as the greatest broadcaster of our time, a statement that's difficult to argue with.

Watching The Late Late every Friday is a calendar fixture in many Irish homes, not one that can be messed with under any circumstance and although there have been new hosts since he departed in 1999, Uncle Gaybo could never be replaced.

Gay had the ability to put everyone at ease and tackled many a thorny topic during his 37 years fronting the weekly show.

He had that very special quality as an interviewer, elusive for many broadcasters - knowing when to pose that all-important probing question but equally, realising that keeping quiet can elicit more from the interviewee than a thousand words ever could.

One of his most memorable chats was in 1999 with Terry Keane who spoke openly about her affair with Charlie Haughey, the former Taoiseach. The reaction to it was so overwhelming that Haughey later went into hiding from the media.

Aside from the serious stuff, there were also laughs and plenty of them. 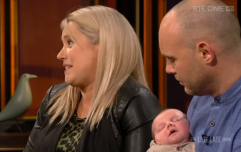 END_OF_DOCUMENT_TOKEN_TO_BE_REPLACED

When The Late Late show started, Ireland was a very different place and even a mere mention of contraception was frowned upon. You can imagine the reaction then when Gay Byrne produced a condom from his pocket, in a bid to educate his audience what such an item looked like.

He even gave instructions as was his way, you could never accuse Gaybo of avoiding the big questions - just one of the reasons he's been cited as Ireland's most talented broadcaster.

Who can forget that 1993 clip of Boyzone, half-naked, dancing around the Late Late studio leaving both the audience and Gay completely bemused at their performance.

Professional as always, Gay stood back for their "dance" and honestly, those moves, they get more hilarious every time.

Dustin, Zig and Zag will forever be etched on the memory of every 90s child in Ireland and their arrival on the 1992 Late Late Toy Show is a true blast from the past.

There's serious comedic value with Gay pretending to be irritated by the appearance of the messer that is Dustin and the trio attempting to chase him around the studio with a remote control car. TV gold right there.

Gay was a pro at acting cranky when really, this made him all the more lovable and hearing his voice in these clips brings me right back to my childhood with his modular tones signalling the start of another weekend, aka two days away from school.

Gay is survived by his wife Kathleen and his two daughters, Crona and Suzy. There will never be another like him and he has left an impressive legacy behind, a reputation and standard that other broadcasters will strive toward for years to come.

popular
People are freaking out thinking that their star signs have changed
QUIZ: Can you guess the TV series from the intro lyrics?
Someone has ranked the penis size of men from all over the world
The trailer for The Deceived has dropped, the new thriller starring Paul Mescal
Will Smith admits to 'failing miserably' in 21-year marriage to Jada Pinkett Smith
Body found in search for missing Glee star, Naya Rivera
Kate Middleton has addressed the rumours that she's pregnant with her fourth child
You may also like
3 months ago
Brendan Gleeson, Samantha Barry, Dermot O'Leary lead The Late Late Show lineup tonight
3 months ago
The lineup for tonight's Late Late Show has been revealed
4 months ago
'Be a good citizen and do it for Ireland': Ryan Tubridy gives inspirational speech on Late Late Show
4 months ago
The Late Late Show cancels live Limerick show due to coronavirus fears
4 months ago
The Late Late Show to broadcast live from somewhere in Ireland for St Patrick's Day
5 months ago
Marian Keyes told a hilarious story about her mother on The Late Late Show
Next Page