Here's why you should always moisturise after showering

We all know at this stage that moisturising your skin is obviously a good idea.

But in winter time when you hop out of the shower it can be extremely cold which means you're probably not in the mood to stand around lathering up your skin. So instead you get dressed ASAP or you lie under your covers in your towel waiting to dry off a bit (or is that just me?).

Anyway, if you're skipping moisturiser, you really shouldn't be according to the experts.

Avoiding moisturiser means that you will end up with dry skin which leads to other problems.

The dermatologist adds that the timing of the lotion application is also important.

“In biology class, we were taught that water moves from higher concentration to a lower concentration, and that’s exactly what happens post-shower. When you emerge from the shower, you have a higher concentration of moisture compared to the air — especially in the drier months with heaters. So water evaporates off the skin quickly, leaving the skin dry.” Engelman added. 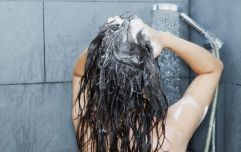 This small change in your shower could help relieve some anxiety

END_OF_DOCUMENT_TOKEN_TO_BE_REPLACED

If you moisturise, some of the moisture from the shower gets trapped on your skin, which is  a good thing, as it helps to keep skin moist. But in order to trap that moisture, you need to moisturise immediately after you shower.

So if you wan't to avoid dry skin, moisturise and do it as soon as you hop out of the shower.

popular
Vogue Williams slams man who refused to swap seats with her on plane
New Zealand family find two bodies in second hand suitcases
Joe Swash helps 95-year-old woman and carries her to hospital
Crown Paints advert receives 200 complaints over 'misogyny' and 'everyday sexism'
Are we getting a mini heatwave in September?
Adam Collard allegedly attacked on night out with Paige Thorne
Green Party representative calls for a temporary ban of stag and hen parties in Ireland
You may also like
2 years ago
Sorry, what? Apparently, one in 30 people poo in the shower and we're feeling alarmed
3 years ago
Apparently, having a shower everyday is the worst thing we could do to our bodies
4 years ago
We're not too sure about this expert's 'recommendations' for showering
4 years ago
This common shower habit could be causing your acne troubles
5 years ago
Busting the myths of hot drinks and cold showers in hot weather
5 years ago
Showering too often could lead to health issues
Next Page