"It's My Clitoris, Not the Sphinx" - 10 Life Lessons from Sex and the City's Miranda

In hindsight, poor old Miranda got a raw deal while ground-breaking TV show Sex and the City was still on our TV screens. Often the naysayer and complainer in the group, our deluded young selves argued the case for why we were the Carrie, the Charlotte or the Samantha of our respective circle of friends, anyone but Miranda really. Now, ten years after the last episode aired, we have a new-found respect for fiery Miranda, and her zero-tolerance attitude to bull. You go girl. To mark actress Cynthia Nixon's birthday, here are ten of the best lessons Miranda taught a younger you.

1. There is no room for another woman in the bedroom

2. It's all one big conspiracy

3. Sometimes friends need to tell you things you really don't want to hear

4. Sometimes you still won't listen, and you need to be told again 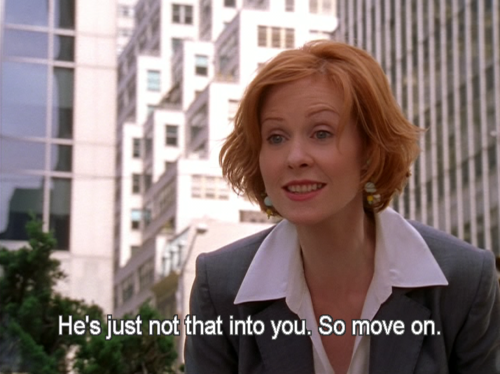 5. It's ok to zone out for a guilty pleasure now and again 8. Everything said about dating is actually code for something else 9. Sometimes there is no winning

popular
Primark reintroduces female-only fitting rooms after two men walk in on woman
Anna Delvey is set to be released from prison
Davide Sanclimenti opens up on having kids with Ekin-Su Cülcüloğlu as he turns down Dancing On Ice
Hilary Swank, 48, reveals she is pregnant, expecting twins
People are being warned not to dress as Jeffrey Dahmer for Halloween
I’m A Celebrity bosses ‘sign first Love Island contestant for 2022 series’
So apparently George and Mollie from Love Island aren't actually step siblings
You may also like
1 week ago
Sarah Jessica Parker has confirmed Aidan will definitely be in And Just Like That season 2
2 months ago
New show from Sex and The City creator is coming this month
3 months ago
Kim Cattrall is returning to our screens in new Netflix show all about the beauty industry
3 months ago
And Just Like That writers say Samantha Jones will feature in season 2
4 months ago
Sarah Jessica Parker says she has not spoken to Chris Noth since sexual assault allegations
5 months ago
Kim Cattrall has finally shared her thoughts on And Just Like That...
Next Page