A hero's farewell to a dog that made a difference.

A Golden Retriever believed to be the last 9/11 Ground Zero search and rescue dog has passed away, just a few months before her 17th birthday.

Bretagne (pronounced "Brittany") and her owner Denise Corliss were part of the Texas Task Force 1 deployed to the World Trade Centre following the terrorist attacks of September 11, 2001, where they, along with hundreds of other valiant search teams, tirelessly worked 12 hours a day for two straight weeks to try and find survivors among the rubble.

The courageous dog went on to aid response teams for Hurricanes Katrina and Rita, consistently putting herself in danger to save human lives.

She left Texas Task Force 1 in 2009, retiring for good a few years later, and after suffering kidney failure, Corliss and her family made the difficult but ultimately necessary decision to have her put down.

But before the sad goodbye, came an entirely earned hero's salute from firefighters at the Cy-Fair Fire Department in Harris County, Texas, who lined the pathway to Fairfield Animal Hospital as her proud owner walked her into the vets.

According to the Houston Chronicle, an American flag was later draped over her body as she was carried out of the building. 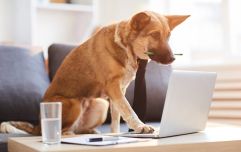 END_OF_DOCUMENT_TOKEN_TO_BE_REPLACED

Since her retirement, Bretagne has visited schools and sick children, as well as helping with the training of new search dogs.

A spokesperson for the fire department said: "Some may say that the most a dog could be is a pet, however, to the over 400 members of the Cy-Fair Volunteer Fire Department, Bretagne was a civil servant, a hero and is family.

“We will remember her fondly and continue serving the community with her as inspiration.”

For her 16th birthday - the birthday we now know would turn out to be her last - Bretagne and Denise were given the VIP treatment they deserved. You can watch the video of that day below. Just have a few tissues handy.

popular
He may be a politician, but Leo Varadkar's personal life is none of our business
Parents told to stop buying selection boxes for kids- here's why
EastEnders' Samantha Womack "thankful" as she is now cancer-free
Amber Heard appeals 'chilling' $10.3 million Johnny Depp verdict
This Netflix Christmas film is being dubbed the perfect rom-com
Mollie King shares how her daughter's middle name honours her late father
Gwen Stefani reportedly pregnant with baby number four
You may also like
1 month ago
Dogs Trust appeal for support after taking in 54 puppies in 3 weeks
3 months ago
Joey Essex cancels dog adoption after learning about ear-cropping
4 months ago
Man arrested as police seize 57 puppies in Belfast
8 months ago
RSPCA finds home for the oldest cat they've cared for
9 months ago
Gardaí investigate theft of baby pygmy goat from Dublin farm
9 months ago
RSPCA rescue tiny Cockapoo puppy dumped in rucksack in woods
Next Page