'You like big dick?' - We're calling it! Romance is dead because of this ONE guy

I'd like to begin this article by shaking off that dick of a headline. Yes, I wrote it, but I dislike it immensely and also... tinder made me do it. Whenever I feel disillusioned with romance (or indeed life) I'll turn to Brontë:

'He shall never know that I love him: and that, not because he's handsome but because he's more myself than I am. Whatever our souls are made of, his and mine are the same'.

END_OF_DOCUMENT_TOKEN_TO_BE_REPLACED

Yep, I quoted Wuthering Heights of a Monday and I'm not even sorry. In my defence, I'm attempting to inject some romance into our lives, perhaps it's due to the fact that I had to re-write the 'dick' headline five times as it kept making me shudder, or perhaps I'm just a bit of a dick too... who knows?

Let me give you some 'dick' context, the headline question was not posed to me. I'm no longer on dating apps, but I've had enough member related sizing queries to last me a lifetime.

However poorly constructed, the question is valid, and we all have an answer, but the simple fact remains: 'IT'S NONE OF YOUR DAMN BUSINESS WHAT SIZE DICK I LIKE'.

On this week's episode of Girls With Goals we're joined by the newly crowned Rose Of Tralee Kirsten Mate Maher. We're chatting about how her life has changed since winning the title (6:13), how frustrating it is to be called old fashioned (16:19) and we also dive into the murky world of online dating (we're getting to the big dick, promise).

The dream that is @kirstenmatemaher is on #GirlsWithGoals this week. We’re chatting about the @roseoftraleefestival some modern tinder mishaps, the controversy that comes every year and MORE, link is in my bio ? we weren’t allowed try on the sash (fair) . . . . . #podcast #broadcast #RoseOfTralee #tinder #dating #modern #ireland #festival #crown 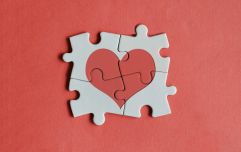 'Ethical non-monogamy': polyamory is in the mainstream, here's how to do it right

END_OF_DOCUMENT_TOKEN_TO_BE_REPLACED

Our beauty editor Rebecca O'Keeffe, who not so long ago coined the phrase 'chronically single', joins us with all the latest pick-up lines from the world of Tinder. As a self-confessed 'app deleter' Rebecca frequently finds herself riding the romantic merry-go-round of online dating before freaking out, deleting the whole thing and rocking back and forth in the dark (I'd imagine).

This is where the 'big dick' enters (apologies), if you want to hear how all her dreams were quashed listen in to this grim re-telling of two star-crossed Disney lovers who never stood a chance (26:31).

This epic tale involves, but is not limited to... dicks, a Rose, a mortified boyfriend, a festival director and much more.

Emily Brontë can keep her moors, if romance is dead in these modern times at least it's bloody hilarious.

popular
Women are rinsing their hair in apple cider vinegar – and the results are amazing
Viewers left unimpressed after “ridiculous” Operation Transformation scene
Horrifying CCTV footage shows woman being kidnapped by her boyfriend
"Hair contouring" is about to be huge, here's everything you need to know
Irish people expecting babies via surrogate in Ukraine urge to contact Foreign Affairs Department
The Puppet Master: Where is Robert Hendy-Freegard now?
Worried about a loved one? Here are 5 signs of suicide to look out for
You may also like
6 days ago
So it turns out Anna Kendrick and Bill Hader have been secretly a thing for a year
2 weeks ago
Ireland AM's Elaine Crowley says she finds dating hard as she splits from partner
1 month ago
Fans are convinced a Selling Sunset star is dating Zac Efron
2 months ago
'Golden penis syndrome' might be the reason we're always getting ghosted
2 months ago
Kim Kardashian "likes" Pete Davidson, apparently
4 months ago
Twitter is going nuts over Olivia Munn and John Mulaney being a thing
Next Page