A London mother was not happy when her daughter came home from school wearing an LGBT badge promoting equality and acceptance of sexual differences.

She took to Facebook and launched a homophobic rant against King Solomon High School in Redbridge for attempting to "force this filth on children", but she did not get the reaction she hoped for. (Thankfully).

She wrote: ‘So my daughter came home from 6th form (college) today with this badge… Apparently all children from age 11+ were given one of these and told if they do not wear it they will have to sit detention after school.

END_OF_DOCUMENT_TOKEN_TO_BE_REPLACED

"Are they mad! You cannot force this filth on children. It is not lesbian, gay, bisexual and transgender week in my house. We will be serving the Lord as usual and NOT promoting sin so KS high school, you can keep your abomination badge."

Including a passage from the bible, she posted the status alongside an image of the badge with a red cross drawn over it. 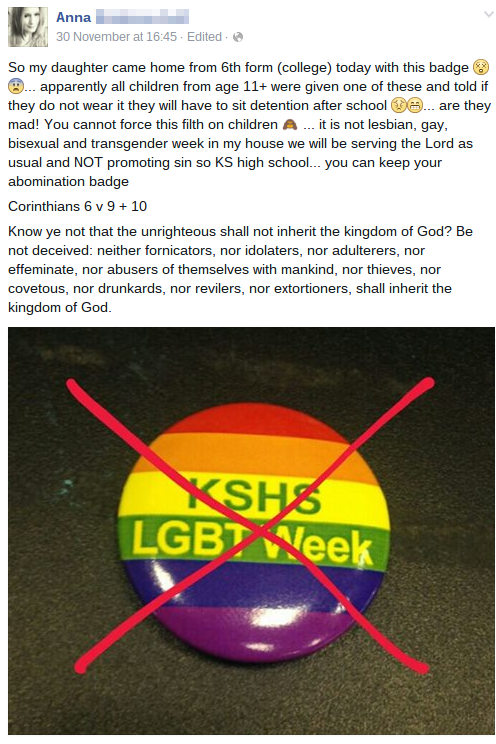 While the post was shared 232 times and got 470 likes, people were quick to express their disgust at her mean-spirited rant.

"If one child goes home from KS High School this week no longer considering taking their own life, job done.

"If one more child decides they have the courage to tell their parents about their confusion at their sexuality, job done."

END_OF_DOCUMENT_TOKEN_TO_BE_REPLACED

Deputy headteacher of King Solomon, Sam Walters told The Metro: "We haven’t heard from the mother, but I have had parents writing to me to say how thankful they are and how their children have come home this week really interested in what they are learning.

"As a school, we have a duty to prepare our students for life in modern Britain."

popular
Late Late Show viewers are not happy with Ryan's questions for Billy Connolly
10 items from Zara for the perfect autumn capsule wardrobe
Former detective chief says Brian Laundrie discovery is "strange"
WATCH: Parents see person walk past daughter's crib in creepy baby monitor footage
8 things we learned about Adele from her 73 questions with Vogue
Apparantly, there is one colour you should never wear at a job interview
Paris Hilton says she was "slapped" and "strangled" as a teen in youth care
You may also like
3 days ago
Facebook looks set to change its name as part of rebrand
2 weeks ago
9 of the best memes from when Instagram and WhatsApp were down
2 weeks ago
Facebook, Instagram and WhatsApp down as outage hits for hours
4 months ago
Andrew McGinley shuts down Conor's Clips Facebook page due to "trolls"
6 months ago
How to check if your phone number was leaked in the Facebook breach
10 months ago
Facebook to remove false claims about Covid-19 vaccine
Next Page