It started just hours after she was elected.

New Zealand's new Labour Party leader spent her first day on the job answering questions about her plans for parenthood instead of policy.

And just seven hours after she was elected, she appeared on local TV show The Project - where she was quickly quizzed on her baby plans.

One of the hosts, Jesse Mulligan, asked:

“I’ve got a question, and we’ve been discussing today whether or not I’m allowed to ask it.

“A lot of women in New Zealand feel like they have to make a choice between having babies and having a career or continuing their career . . . so is that a decision you feel you have to make or that you feel you’ve already made?” 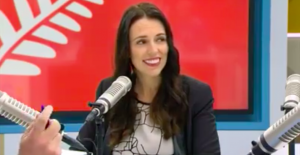 “I have no problem with you asking me that question, because I have been very open about discussing that dilemma, because I think probably lots of women face it.”

She explained that she didn't feel her "dilemma" was any different from any other woman juggling several priorities and responsibilities.

But the opposition leader noticeably tensed up during her appearance on local talk show The AM Show the following morning when panelist Mark Richardson said employers "need to know that type of thing from the women you are employing".

"I think this is a legitimate question for New Zealand, because she could be the prime minister running the country - she has out best interests at heart, so we need to know these things.

“If you are the employer of a company you need to know that type of thing from the woman you are employing … the question is, is it OK for a PM to take maternity leave while in office?”

But Arden said that while she was happy to answer questions about her family plans, since she had been open about it in the past, she drew the line at other women being asked.

Pointing at Richardson, she said:

"For other women, it is totally unacceptable in 2017 to say that women should have to answer that question in the workplace.

"That is unacceptable in 2017. It is a woman's decision about when they choose to have children and should not predetermine whether or not they are given a job or have got opportunities."

Girls With Goals || Her · Ep.151: 'A Story Shared' - Aoife P. Rafter on blogging during a pandemic and living with CF
popular
'I feel betrayed': Curtis Pritchard on Maura Higgins and Chris Taylor's relationship
'I loved it': The childhood drug addiction that inspired The Queen's Gambit
Viewers praise Corrie for emotional scenes as Leanne's son Oliver passes away
Ross was never meant to say Rachel's name at the altar, Friends writer reveals
All the series and movies you need to see before they leave Netflix in December
Here's what happens on every day of your menstrual cycle (roughly)
9 movies on Netflix that are perfect for a lazy Sunday afternoon
You may also like
3 weeks ago
Baby Shark has just become the most watched YouTube video EVER
1 month ago
Forget coffee – whipped strawberry milk the new viral drink trend your life needs
2 months ago
"Cancel Netflix" trending after new movie that "sexualises children"
5 months ago
Here's how to make a vegan 'fried egg', according to an Australian food blogger
8 months ago
The Duchess of Cambridge has revealed Prince Louis' favourite song (and it's a classic)
9 months ago
A postpartum ad has been banned from the Oscars this year
Next Page