Nine-Year-Old Helps Save Her Father From Burning Building

The little girl had received fire training at school and acted quickly, waking up her father. Thinking of what she had learned in school, Galaxy told her father to open the window.

Hayward Fire Captain, Don Nichelson said she then remembered another crucial tip: “She paid attention when we do fire safety training at schools,” he said. “She put a towel under the door — it blocks the smoke from under the door". 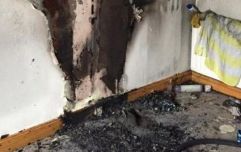 END_OF_DOCUMENT_TOKEN_TO_BE_REPLACED

Galaxy and her father escaped out through a window on the second floor with a nearby construction company helping them to safety.

Speaking afterwards, the nine-year-old said that in addition to training at school, she learned about fire safety through reading and watching films.

The fire was put out twenty minutes after it was reported, according to CBS San Francisco. There were no injuries and authorities believe the blaze started in the kitchen.

popular
Tributes paid to Limerick based blogger and model Patrick McLoughney
This TikTok hack shows you how to pack more despite baggage allowance
Lidl closing early this weekend to thank staff for hard work
This is how much 91-year-old Queen Elizabeth drinks every day
Simon Harris gives three urgent options for easing restrictions next week
Another Strictly star has pulled out of the live show
Not going anywhere: Baby names set to stay popular for the next decade
You may also like
3 months ago
Fire brigades rush to put out Vicar Street blaze
1 year ago
Warning issued as Dublin house fire caused by electric scooter
2 years ago
Local fire brigade share images from aftermath of car park blaze in Cork
2 years ago
Attention BBQ lovers: WIN two tickets to the Big Grill to give your taste buds a treat
2 years ago
A hundred firefighters are battling a massive fire at block of flats in east London
2 years ago
Guinness X Meatopia is BACK! Expect tastings, workshops and an insane lineup
Next Page