No, not wearing a bra during lockdown won't make your boobs 'sag'

Even during a global pandemic us gals can't catch a break.

Look lads, the Covid-19 pandemic has been chronic enough without the male gaze rearing its ugly head.

Social distancing is very much in full swing, only non-essential businesses remain open, healthcare workers are being worked off their feet and yet, women are still being chastised for being comfortable.

END_OF_DOCUMENT_TOKEN_TO_BE_REPLACED

Since the outbreak began, social media has been awash with people celebrating the simple fact that they can now carry out most of their daily activities without wearing a bra.

Head to work? No need to wear a bra. Cook a bit of dinner? Let them hang free. Hit up the supermarket for a sliced pan and 20 pack of toilet roll? You know how this works by now.

It's a more comfortable way of living, a release that would not have been possible if regular life had continued as normal, a means of chilling out that was previously undiscovered for many.

And it's already been totally shat on by, ahem, "experts" who have claimed that not wearing a bra will make your boobs sag. Cool.

END_OF_DOCUMENT_TOKEN_TO_BE_REPLACED

Victoria Shelton, a garment technologist at Figleaves (no, no idea either), told the Daily Mail that ditching your bra in the midst of the coronavirus pandemic will apparently damage the connective tissue in boobs that helps maintain "structural integrity."

"If breasts are left unsupported damage can occur to the Cooper's ligament in the breast, causing them to sag," she said.

"Our wardrobe needs have changed as we find ourselves at home. But we all still need to wear a bra as our breasts need to be supported – due to their weight you may damage your posture or have back pain if your breasts aren't fully supported."

END_OF_DOCUMENT_TOKEN_TO_BE_REPLACED

The article also cited a cosmetic surgeon, who unsurprisingly echoed the sentiments of the garment technologist saying that us gals would want to look after our boobs lest they lose some of their ever desirable perkiness.

In actual fact though, multiple studies have refuted the above entirely, finding that breasts are more likely to sag if you wear a bra than if you don't wear one.

In 2013, a 15 year study found that wearing a bra actually did more harm than good, and had virtually no impact on back pain.

In fact, bras are more likely to weaken the muscles in the breasts rather than make them stronger. 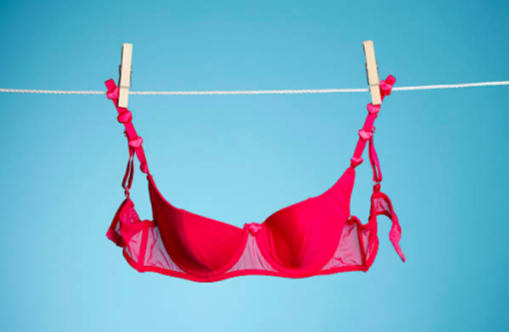 Jean-Denis Rouillon, a sports science expert from the University of Besançon, France, said that for a lot of women, wearing a bra may not have much benefit at all.

“Medically, physiologically, anatomically – breasts gain no benefit from being denied gravity. On the contrary, they get saggier with a bra" he said.

Now, Jean-Denis' study did only include women younger than 35, so he doesn't claim that his findings are entirely representative of women across the globe.

Despite this, he remains pretty adamant that if many younger women were to stop wearing a bra, the change wouldn't affect their breasts negatively at all.

Obviously, there are plenty of times that a person might find themselves wanting, or indeed needing, to wear a bra.

Exercising is generally one of them, due to the discomfort that can be triggered by so much activity. Women with larger breasts may also be inclined to wear bras more so for extra support.

Essentially, wear what you want and do what you please - just know that ditching your bra for a few months probably isn't going have any crazy detrimental effects on your boobs.