Dating is hard work these days.

The beginning stages of any relationship can turn some of us into amateur detectives. We're sussing a potential partner out, we're analysing their every word - essentially, we're trying to find out if they're a good match for us.

END_OF_DOCUMENT_TOKEN_TO_BE_REPLACED

In contrast to the more widely known concept of red flags - toxic traits or behaviours that signal one to get up and run - a pink flag could go either way. It's not necessarily a problem in itself but it could be a precursor to a big issue later down the line.

Maybe the person you've started seeing is really good friends with an ex, maybe they're a little too obsessed with the gym, maybe they're throwing in one too many vaguely sexist jokes on your first date, or maybe you just have mismatched love languages. These things aren't exactly dealbreakers themselves, but they could potentially get in the way later on.

“Sometimes, when blinded by love, we can easily overlook the more negative aspects of our partners,” Robert Davies, relationship expert at Condoms.uk, says. “Many negative traits which show as an initial red or pink flag might actually be revealing bigger underlying issues.

"While not necessarily deal breakers, these issues could present the start of a wider issue with your partner if not managed in the first appearance of them."

END_OF_DOCUMENT_TOKEN_TO_BE_REPLACED

Some pink flags will fade to nothing when you get to know a person. Say, for example, someone is terrible at texting you back, and constantly leaves you on read - this could be a huge warning sign.  However, you find they love spending time with you and give you their full attention in person - and your worries dissolve.

Or they're a little tight with money, and you interpret their lack of spending as a sign they don't really care about showing you a good time. Then you find out they recently switched jobs and are going though some financial difficulties.

As a society, we've never been more picky. The pandemic and seemingly never-ending lockdowns gave us all a lot of time to think and many of us came out on the other side knowing exactly what we want from a partner, unwilling to accept any less.

As well as this, the dating lexicon is ever-growing, and it feels like there's more than ever to be aware of. Over on TikTok, videos tell you to dump your date over the smallest icks of personality differences. 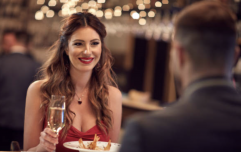 END_OF_DOCUMENT_TOKEN_TO_BE_REPLACED

Dating is supposed to be enjoyable, but it's starting to feel like work. It's no wonder more people than ever are going solo and embracing movements like single positivity. Should we stop with the analysis and go with the flow?

If find yourself spotting pink flags, odds are, they're probably not going to ruin a potential relationship. We all have flaws, and if you're looking for perfection in a partner - well, you're never going to find it.

However, if you're finding yourself hung up on a few pink flags, there's no harm in communicating this. Voice your concerns in a way that doesn't come from a place of judgement.

popular
Hang on, Tasha and Coco know each other already?
Reports of image based sexual abuse involving 200 women investigated by Gardaí
Love Island: Mollie's family issue apology following allergy comments
Love Island fans think someone has left after Luca arrives back to empty bed
WATCH: Gemma is left fuming in tonight's Love Island as Luca kisses another girl
Ireland expected to be hotter than parts of Spain this weekend
Penneys has a perfect dupe for Charlotte Tilbury's Flawless Filter foundation
You may also like
5 days ago
Love Island's Gemma finally tells villa about dad Michael Owen on TV
1 month ago
Is a Love Island All Star season in the works?
1 month ago
First Dates Ireland is officially looking for new singletons to join the show
2 months ago
Ditching the Dutch courage: Is dry-dating the way forward?
3 months ago
What the hell is a dopplebanger?
4 months ago
Is it important to know your partner's love language?
Next Page