Sinn Féin Has A Special Valentine's Message For Enda And Joan

The General Election is now less than a fortnight away, and politicians and parties are doing all they can to convince the Irish people to either (a) give them another chance or (b) start fresh with a new government.

The parties are all vying for our attention particularly on social media , and this Valentine's day post in particular got ours.

Sinn Féín took to Facebook to deliver a message to the general public, basically imploring us to dump Enda and Joan and start the new Dáil with a clean slate. 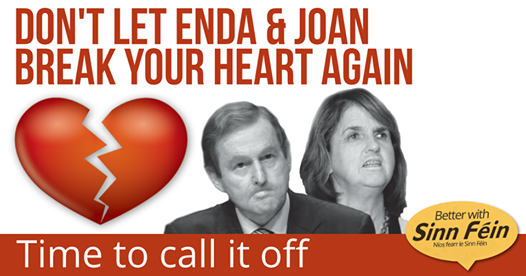 So will we have to make the awkward call to Enda and Joan to say we're over? Or will it take more than a gas Facebook post to convince citizens?

All will be revealed on February 26th. It's like a soap opera cliffhanger.

For the weekend that's in it...

Girls With Goals || Her · Ep.160: The Beauty Of Coaching - Hayley Harrison joins us from Sport Ireland
popular
Regé-Jean Page arrives in Ireland to shoot new movie
The Handmaid's Tale season 4 confirmed for RTÉ2 this May
Hairdressers will be "prioritised" in reopening plan for May
Storm Lola to bring high temperatures to Ireland, says Met Éireann
"I didn't sell anything" Pete Bennett defends sharing Nikki Grahame's last text to him before her passing
Lizzo's nude - and unedited - selfie is so important
Here's what happens on every day of your menstrual cycle (roughly)
You may also like
1 week ago
Instagram v reality: Why are we so fascinated by "normal" photos of celebrities?
3 weeks ago
Woman goes viral on TikTok after posting picture of wine glass without noticing reflection
3 weeks ago
Laura Whitmore replies to "disgusting" Instagram DM, urges people to "think before they send"
1 month ago
Instagram bans adults from messaging users who are under 18
4 months ago
David Attenborough quits Instagram just two months after joining
5 months ago
3 things I've done to make my Instagram feed better for my head
Next Page