Bono and Bruce performed together last week, earning themselves the portmanteau 'Bruno'.

It was Sunday's concert in Croke Park that the U2 singer made an appearance on stage with The Boss, singing Because The Night and just generally being best mates. Obvs.

People were only delighted with the surprise duet in Croker... well er... most were:

And Bono joined in @springsteen #unreal #TheRiverTour Thank You!!!? 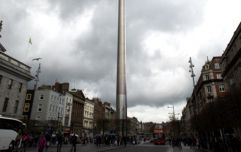 Seven Things You May Not Have Known About... Dublin City

END_OF_DOCUMENT_TOKEN_TO_BE_REPLACED

There's one person in particular who wasn't happy about the duo performing onstage and her reaction was displayed on the big screen.

Plenty of Bono haters will resonate with the woman in the purple jumper in the clip, with her disgusted face showing what many Bruce fans may have been thinking:

I wonder has she seen the footage? Or did anyone else see her hilarious reaction on the screen?

After this video, she's my new favourite person.

popular
Bride asks for divorce day after wedding following groom's disrespectful cake stunt
Head of dive squad searching for Nicola Bulley thinks 'something's not right'
Rosanna Davison issues warning to parents after health scare with Sophia
Has the Call Her Daddy podcast just pulled the best marketing stunt of all time?
Tributes paid following tragic death of Emma Pattison and her family
Yet another former Islander has hinted at their return for Casa Amor
WIN: A weekend away in London for you and a friend - including a 5* hotel stay, flights and dinner
You may also like
3 months ago
Bono and Ryan Tubridy are among the "most admired" people in Ireland, apparently
5 months ago
Bono bumps into girl on her way to the Debs as he visits old home
2 years ago
Bono has revealed that U2 bought €10million of PPE for Ireland's frontline workers
4 years ago
Bono admits to Ellen Degeneres that joining U2 saved his life
5 years ago
Bono and Johnny Depp looked like they had the craic at Shane McGowan's 60th
5 years ago
Noel Gallagher's hilarious story of going on a session with Bono in Dublin
Next Page