Unfortunately homophobia is still common. It can be hard to know how to deal with such bigotry but this woman's response is very impressive.

When this American woman and her husband decided to leave the Mormon Church, a neighbour called over to talk to them.

This is when Rosey Crotch found that her neighbour had homophobic views.

“She came bouncing over and when my husband told her we no longer attended [the Church], she didn’t get the message.” She shared on Reddit.

“Anyway, thinking that we were allies, she went on to tell us how horrified she was when her son got turned down for prom because the girl was already planning on going with her girlfriend.”

The neighbour then expressed her dislike about how the local school recently held an assembly to discuss transgender issues.

“That, coupled with the school’s justification for letting lesbians attend the prom together and doing an assembly that taught kids the facts about being transgender were just too much for her,” Rosey said.

“She said that she had to move away because she was so sick of the gays and transgenders and everyone making their ‘lifestyle’ okay.”

Rather that express her disapproval vocally, Rosey instead made a colourful statement with her garden. 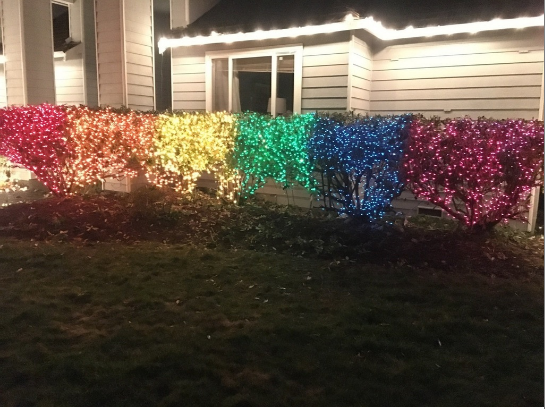 This is giving us some serious inspiration for Christmas.

Girls With Goals || Her · Ep.151: 'A Story Shared' - Aoife P. Rafter on blogging during a pandemic and living with CF
popular
QUIZ: How well do you remember The Princess Diaries?
Ross was never meant to say Rachel's name at the altar, Friends writer reveals
'I feel betrayed': Curtis Pritchard on Maura Higgins and Chris Taylor's relationship
QUIZ: Can you complete these iconic Girls Aloud lyrics?
All the series and movies you need to see before they leave Netflix in December
'There aren't any plans': Ruth Jones denies rumours that Gavin and Stacey is returning
You may also like
5 months ago
LGBTQ+ discrimination banned in the workplace, US Supreme Court rules
5 months ago
10 books with LGBTQ+ themes to add to your reading list this Pride month
6 months ago
'Not enough': 60 percent of children not covered by new LGBT+ parents law
11 months ago
J.K. Rowling has come under fire after supporting woman fired for transphobic tweets
1 year ago
73 percent of Irish LGBTI+ students feel unsafe at school, study shows
1 year ago
'I feel invisible' The same-sex parents still fighting for Equality for Children in Ireland
Next Page