He stole our hearts...and a pole from the agility course, too.

Kratu the rescue dog returned to Crufts, the annual dog show held in Birmingham, this week for his final run at the agility course before his retirement.

And, much like he's done with his now-viral performances from the last few years,  things didn't quite go to plan - although, he looked like he was having the best time.ever.

Kratu is a Carpathian-Mioritic mix, who was rescued by his handler Tessa when he was a puppy.

Back and giving it my best for final performance! ????? https://t.co/NJ0ceJMvlG

For his final Crufts appearance, the playful dog played peek-a-boo in the tunnels - and seemed to be pretty happy to make up his own routine for his farewell performance.

He then pulled off a mini-heist, grabbing a piece of one of the agility course's hurdles and running off with it.

“That’s definitely against the rules,” one of the announcers said with a chuckle, while the other added that he had never seen a dog take a part of an obstacle before, noting that Kratu was a "rascal". 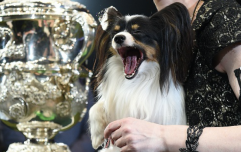 END_OF_DOCUMENT_TOKEN_TO_BE_REPLACED


popular
David Beckham shared his dinner on social media and we really wish he hadn't
Disney Plus announces new titles coming in April
Katy Perry reveals the gender of her first child with Orlando Bloom
#Covid-19: Kim Kardashian says lockdown has made her realise she doesn't want more kids
19 brilliant books to read while you're social distancing
5 new additions to Netflix to spend your weekend watching
10 summmer dresses we are ordering this week to cheer ourselves up
You may also like
1 year ago
A comprehensive rundown of all the good boys spotted at Crufts 2019
2 years ago
8 of the best doggos giving it their all at this year's Crufts
4 years ago
12 Adorable Dog Memes From Crufts 2016
2 weeks ago
10 rare (and stunning) Irish baby names not everyone has discovered yet
2 weeks ago
We have the perfect list of things to do at home to share with your Mum
2 weeks ago
WATCH: Dog graciously stops owner from leaving the house due to coronavirus
Next Page