WATCH: Mariah Carey releases new 'All I Want For Christmas Is You' video and it's extra AF

Mariah Carey releases a new video for 'All I Want For Christmas Is You' and it's extra AF.

The classic hit gets played countless times every festive season but this year, there's a new video to go with the familiar lyrics.

Last night, Mariah Carey debuted the video on a YouTube live stream which included her answering questions from fans.

The 'happiest Christmas song ever' has been revealed

END_OF_DOCUMENT_TOKEN_TO_BE_REPLACED

The video was released at midnight and you can be sure the views will rocket this morning as people tune in to see the revamped version.

You could apply the adage "if it's not broken then don't fix it" but it seems that the songstress was eager to give the much-loved song a makeover for 2019.

Chatting during the livestream, she said that the new release was more of a "production" and pretty much the opposite of the original.

And a production it most certainly is because, in comparison to the old-school video camera footage of the 1994 release, the new version is what we would describe as the epitome of "extra". 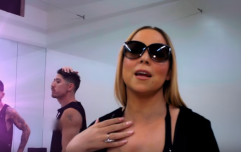 END_OF_DOCUMENT_TOKEN_TO_BE_REPLACED

Mariah is wearing a fitted Santa suit, yes really, and the whole thing is shot in a life-sized winter wonderland complete with candy canes, singing Santas and toy soldiers.

Children join in too with the opening shot showing a child introduced to a shop-front window featuring Mariah before the 'MC' winter wonderland is revealed in all its glory.

Extra AF, extremely cheesy but then that's all part of this particular song. We could go on but you do need to see the clip to do it justice.

Like it or hate it, this is one of the Christmas season's most-played songs and every year, the first play of the opening line signals the start of the festive season for many, usually in a nightclub where the dance floor fills in seconds.

Check it out below.

popular
It seems Helen Skelton has accidentally given away who her Strictly partner is
Pop Idol's Darius Campbell Danesh has passed away, aged 41
10 year old trans model becomes youngest to walk in New York Fashion Week
Scarlett Moffatt slams 'disgusting' pap for sneaking into hotel to take photos of her
Greg O'Shea actually left Love Island to go to his granny's funeral
Green Party representative calls for a temporary ban of stag and hen parties in Ireland
Ryanair, easyJet and BA issue warning to anyone boarding with smart bag
You may also like
2 months ago
Mariah Carey sued for $20m over All I Want For Christmas Is You
9 months ago
Mariah Carey will return for her very own Christmas TV show this year
11 months ago
World Trade Centre worker says she survived 9/11 thanks to Mariah Carey
2 years ago
Get ready for Rise up New York! where three of our favourite divas will be taking to the (home) stage
2 years ago
Mariah Carey is still making a killing from 'All I Want For Christmas Is You'
2 years ago
Mariah Carey's 'All I Want For Christmas Is You' finally reaches No.1 in the US
Next Page