Women everywhere are losing their minds for this Northern Irish policeman

Just two months ago, both a male and female officer were on the verge of breaking the internet with their good looks and it looks like the rare specimen that is a ridey police officer has only grown.

While many women will confess to liking a man in uniform, one officer for the PSNI in the North has come seriously close to making the women of Ireland commit CRIMES for him. 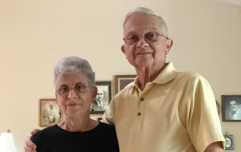 END_OF_DOCUMENT_TOKEN_TO_BE_REPLACED

Yesterday morning, the Police Service of Northern Ireland posted a message to festival-goers attending Tennant's Vital in Belfast, telling them to have a good time and be safe at the gigs. The status featured police officer Bobby Singleton giving information about parking about the festival and to drink sensibly.

"On Thursday and Friday, Tennant's Vital returns to Belfast at Boucher Playing Fields, with headliners The Red Hot Chilli Peppers and Avicii. The PSNI would like to wish all the concertgoers a good time but to stay safe.

Superintendent Bobby Singleton said, “Our message to everyone attending the concert this year is essentially the same as last year; enjoy the music, have a good time, but most importantly, stay safe.

"We are also encouraging those who are planning on attending the concerts to plan their journey in advance. There is designated car parking allocated at the King's Hall Complex, with designated coach parking at the 'Fruit Market' Boucher Road. For those using taxis, the taxi pick-up point after each event will be on Apollo Road.

"Anyone planning on driving to the event is advised to park their vehicle legally and to ensure that it is not obstructing the driveway of any residential or business properties. If you are planning on drinking at the concert, do not drive. It only takes one drink to impair your decision making ability. The only right decision is to leave the car at home if you’re drinking.

"If you are going to drink, please do so responsibly and show respect to local residents, businesses and their property on the way to and from the events. Enjoy the concert look out for each other, and follow the directions of the event security staff and police who are there to keep you safe."

Little did they, nor Bobby know the effect that posting 3 photos of the Superintendent would have on the ladies following the page.

Pictures of Bobby caused the women of Northern Ireland to lose their SHIT over his David Beckham-esque good looks, with many swooning over his handsome face.

Hilarious comments from thirsty women of all ages included...

Even the men of Northern Ireland were forced to admit that police officer Bobby is easy on the eye.

popular
Hollyoaks star Jorgie Porter has welcomed a baby boy
Fundraiser set up for boy attacked by pit bull in Wexford
Ant and Dec open up on their real feelings about the 2022 I'm A Celeb cast
The trailer for Channel 4's Vardy V Rooney: A Courtroom Drama has dropped
Jill Scott admits she gave Owen Warner extra food at meal time
Kylie Jenner shuts down claims she used her children to cover up for Balenciaga
Zendaya and Tom Holland are being flooded with rumours they're engaged
You may also like
6 years ago
Only real 'The Devil Wears Prada' fans can get over 10/13 right in this quiz
6 years ago
Tonight's return of The Late Late Show went down a treat with viewers
6 years ago
People are swooning over Solange Knowles' latest dress
6 years ago
Fans have been left REELING at the outcome of tonight's EastEnders
6 years ago
Ellen DeGeneres and celebrity girl gang spoofed Magic Mike and it's incredible
6 years ago
This girl's 18th birthday cake may be the funniest one ever
Next Page