Ariana Grande just gave the performance of her life at Manchester

It was a truly incredible moment: Ariana Grande this evening took to the stage for the first time since the May 22 attack that killed 22 of her fans, and injured many dozens more.

Ariana lined up after the likes of Robbie Williams, Pharrell, Miley Cyrus, Take That, and Niall Horan.

Taking to the stage at 8pm to an eruption of cheers from the crowd, the 23-year-old opened with Be Alright.

Ariana Grande, Miley Cyrus cover "Don't Dream It's Over," closing on the line "But you know they won't win." #OneLoveManchester pic.twitter.com/F2mYGOja5f 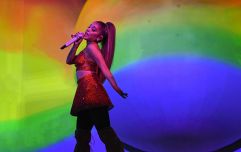 END_OF_DOCUMENT_TOKEN_TO_BE_REPLACED

For the occasion, Ms Grande wore a white oversized jumped emblazoned with One Love Manchester. Her backing dancers had on complementary sweaters in black.

Certainly, the popstar showed no signs of nerves following the brutal terror attack at the Manchester Arena close-to two weeks ago.

"We love you so much" - an emotional Ariana Grande thanks fans at #OneLoveManchester concert https://t.co/5m1DDADb4H pic.twitter.com/gb8vy7OZZL

Ariana followed up with Break Free, before dashing off stage.

Shots of the gathered audience showed the sheer delight of the 50,000-strong crowd during her set.

The moment when Ariana Grande made an emotional return to the stage at #OneLoveManchester. @ArianaGrande @rtenews @RTE2 @RTE2fm pic.twitter.com/ZMIBIT8HKc

By the end a flood of pink streamers came down onto the stage as the spectators once again erupted. The star herself was, understandably, completely overcome with emotion.

"We will not be separated" ?@ArianaGrande, @BEP & @IamWill perform Where Is The Love ? #OneLoveManchester https://t.co/tyx4sbuzwR pic.twitter.com/2m3jeAj48N We FINALLY have a release date for Ariana Grande's new album, and it's so SOON

END_OF_DOCUMENT_TOKEN_TO_BE_REPLACED

"What an incredible moment for Ariana Grande," the BBC - official host broadcaster - said in response. "Such a big decision for her to stage this concert; a brave one. But you could see that she was relishing it - 50,000 people in this arena here in this crowd were too, and you could hear it."

MY WHOLE HEART. I LOVE HER SO MUCH. SHES SO STRONG @ArianaGrande #OneLoveManchester pic.twitter.com/DgE464b32Q

Understandably, social media was gushing in the aftermath of the set; with many praising Ariana's energy and talent.

popular
Norma Foley addresses concerns over schools staying closed in January
Jeffrey Epstein's private jet made multiple stopovers in Ireland
Meabh Feerick passes away after sharing that she felt "let down" by Irish healthcare system
Ryan Tubridy hints this year might be his last Toy Show
Weather warning issued to motorists ahead of "unpredictable" conditions
Stacey Solomon mortified after walking around shop in see through leggings
Liveline listeners call for RTÉ's new property show to be scrapped
You may also like
3 weeks ago
Petition to keep James Corden from starring in new Wicked film hits 25,000 signatures
3 weeks ago
Ariana Grande and Cynthia Erivo cast in Wicked movie
1 month ago
Ariana Grande just confirmed her beauty range is coming next month
1 month ago
Ariana Grande granted restraining order against stalker who allegedly threatened to kill her
3 months ago
It looks like Ariana Grande's is the next celeb make up line we'll be obsessing over
3 months ago
Manchester Arena survivor, 20, dies four years after terror attack
Next Page