"Nailed her song in one take."

The Blizzards' Nial Breslin (Bressie) has teamed up with Saoirse Ruane, one of the young stars of 2020's Late Late Toy Show to release a song together.

The young girl spoke to Ryan Tubridy about how she was diagnosed with a tumour which led to her having to get her leg amputated.

END_OF_DOCUMENT_TOKEN_TO_BE_REPLACED

She then shared that she had three dreams. The first was to appear on the Late Late Toy Show, the second was to walk before Christmas and the third was to go on a family holiday.

After achieving the first two dreams, Ryan then granted the third and told her that she and her family would be heading to DisneyWorld in Orlando, Florida.

Since then, Saoirse has been very busy, and she recently joined Bressie in the recording studio to work on a new track.

Taking to his Instagram, Bressie shared a snap of the two of them in the studio and hinted that they are cooking up new music together.

The musician wrote: "A real pleasure to have this pro in @camdenrecordingstudios today to record her wonderful voice @saoirseandmamma. 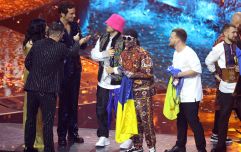 END_OF_DOCUMENT_TOKEN_TO_BE_REPLACED

Taking to her Instagram stories, the proud mother posted a snap of Bressie and Saoirse and wrote: "Making dreams come true."

She then went on to say: "Look at this little superstar after her amazing day in Dublin. And the secret is well and truly out, if you check out Bressie's page, you'll see what we were up to.

"Oh my God, the studio was massive, there were like four to five rooms and a lot of people around. It was just lovely!"

Roseanna added: "We were made feel so welcome and Bressie's so nice and everybody there was so nice. Mamma cried a little bit with pure pride. I'm such an emotional wreck sometimes!"

It's not clear exactly when the song will be out, but we certainly cannot wait to hear it.

popular
Traditional names such as Mary, Maureen, John and Michael may soon be extinct
Mum shares hepatitis warning after young daughter is hospitalised
Princess Charlene says she's "still fragile" after health issues
Husband demands divorce after wife changes baby's name behind his back
Wagatha Christie: Rebekah Vardy storms out of court just 30 minutes into final day
Deborah James "scared to go to sleep" as she receives hospice care
Oklahoma governor signs strictest abortion ban in America
You may also like
6 days ago
The Toy Show Musical is looking to cast young girl in lead role
1 week ago
Saoírse Ruane's family "so grateful" after surgery goes as planned
1 week ago
Saoírse Ruane's mum says daughter faces "fight of her life" ahead of surgery
1 week ago
The Late Late Toy Show is being made into a musical
3 weeks ago
Toy Show star Saoirse's family reveal her cancer has come back
5 months ago
Ryan Tubridy hints this year might be his last Toy Show
Next Page