Social gatherings can be tough.

We can’t be the only ones that want to just curl up on the nearest bar stool around midnight sometimes, after hours of talking to strangers and feigning enjoyment on the dance floor?

Bruno Mars found himself in a similar position at last night’s BET Awards when he was caught by cameras getting a little droopy-eyed.

As Mary J. Blige was rocking the stage, Bruno was struggling to keep his eyes open.

Looking like a college student in a Friday morning lecture, Bruno’s expression was caught by the cameras and, of course, shared across social media.

Bruno Mars is me at every social event? #BETAwards  pic.twitter.com/MQegYb7Z6a 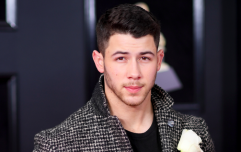 END_OF_DOCUMENT_TOKEN_TO_BE_REPLACED

The singer obviously tired himself out after his own performance at the beginning of the show.

However, he mustered the energy from somewhere to take to the stage to accept him award for Best Male R&B/Pop Artist later in the show – his first win at the awards.

popular
This Netflix Christmas film is being dubbed the perfect rom-com
"You can’t imagine what it feels to have had a baby and yet feel like you didn’t"
Kate Garraway gives heartbreaking update about Derek's health
'Suddenly it's all gone' Andrea Corr opens up about suffering five miscarriages
Nicola Coughlan lands "lifelong dream" role as she gets cast in Oliver Twist
Here's how you can watch all the Harry Potter movies on TV this Christmas
Revealed: The correct date you should be putting up the Christmas tree
You may also like
1 week ago
Julia Fox explains why she really dated Kanye West
1 month ago
Selena Gomez addresses viral photo with Hailey Bieber
1 month ago
Ekin-Su says she plans on dissolving her filler
1 month ago
We finally know when Big Brother is coming back to our screens
2 months ago
Gigi Hadid's dad addresses Leo dating rumours
2 months ago
Here's why people aren't buying Kourtney Kardashian's collaboration with Boohoo
Next Page