Drake and Jared Leto both appeared on the Ellen Show yesterday and made some very interesting confessions during a game of Never Have I Ever with the host.

The rapper was on the show as part of his promo tour for album Views, while Leto was discussing his role as the Joker in upcoming DC movie Suicide Squad.

Ellen always has a great time with her guests and seems to make them agree to all kinds of things, and the pair told some real truths during the game. 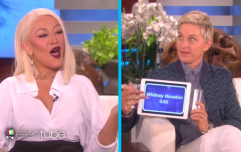 END_OF_DOCUMENT_TOKEN_TO_BE_REPLACED

Perhaps the most important truth of all is that both stars have hooked up with fans.

You're in with a chance guys.

If you missed it, Drake was equally hilarious over the weekend as he hosted Saturday Night Live.

popular
Irish girls name was the most used Irish name in the United States last year
Why Are Men so Obsessed With Boobs? The Answer is Pretty Surprising...
Woman saved from hostage situation after leaving note on food delivery order
Love Island's Remi says arguments with Jacques "ruined" his time on the show
Buying fake designer goods abroad this summer can have some serious consequences
This high street interior collection is everything we want out outdoor space to look like
There's a new online Spotify game and you legit won't be able to stop playing it
You may also like
7 months ago
WATCH: Meghan Markle takes part in hidden camera prank on Ellen
1 year ago
Ellen DeGeneres ending talk show after 18 seasons
1 year ago
Three senior producers "part ways" with The Ellen Show following misconduct allegations
1 year ago
Ellen DeGeneres addresses workplace allegations in letter to staff
1 year ago
Ellen DeGeneres Show workplace under investigation after claims set is "dominated by fear"
2 years ago
Looks like Meghan could be doing her first TV interview with Ellen DeGeneres
Next Page