Get hyped because Toto have just announced a massive Irish gig

I bless the rains down in Live At The Marquee.

It's time to get absolutely hyped because the one, the only Toto have announced a massive Irish gig for next summer.

The US lads will be hitting up the iconic Live At The Marquee event next summer in Cork, alongside the likes of Versatile, Christy Moore, and some other acts that are decent but c'mon - they're not as decent as Toto.

Because, honestly, have you ever been in a scenario where Africa has come on and you haven't experienced a serene sense of calm and total, unadulterated delight?

Toto will be landing in the marquee on June 15, 2019, so you've only got a full seven or months until you'll be blessing the rains down in Cork. 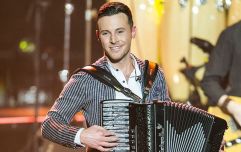 END_OF_DOCUMENT_TOKEN_TO_BE_REPLACED

The band's iconic hit appeared on their fourth studio album, Toto IV, in 1983. It reached number one in the States and a very respectable number three in the UK charts the same week.

Weezer did a cover of Africa earlier this year. It got to number 51.

Tickets for Toto's summer 2019 gig go on sale next Wednesday, December 5 at 9am.

popular
Irish actor Richard Flood promoted to series regular on Grey's Anatomy
Staycation: TripAdvisor reveals the top 10 hotels in Ireland for 2020
WATCH: Sneak peak of Paul Mescal in latest Rolling Stones' music video
Penneys and Andrew Fitzsimons release €14.99 hair straightener and dryer
"Deeply and unreservedly sorry:" Ryan Reynolds apologises for marrying on former slave plantation
Rupert Young, twin brother of Will Young, passes away, aged 41
Why Are Men so Obsessed With Boobs? The Answer is Pretty Surprising...
You may also like
1 week ago
Outdoor eats: 3 of the best places for food outside in Cork city
1 month ago
5 Cork spots we're dying to hit up once restaurant restrictions are lifted
3 months ago
Have you listened to the hilarious 'I'm Grand Mam' podcast yet?
6 months ago
Sushi, lamps and cashmere : Our new show 'Curated With Cassie' is here and it has everything
6 months ago
Gardaí warn of phone scam that could cost consumers a "small fortune"
6 months ago
Eight dogs rescued from 'terrible' hoarding conditions in Co Cork
Next Page