Her.ie Chats To... The Hard Ground

The music industry is a fickle beast and five-piece The Hard Ground are definitely one of the most creative Irish bands in their approach to tackling the market.

The band's soulful signature sound relies heavily on the interplay between the contrasting main vocals of Marlene Enright and Pat Carey, ably backed by Dave Duffy, Davy Ryan and Hugh Dillon. Last year's release of single Bad Faith brought the band firmly into Ireland's musical consciousness and the new album brings their dark and brooding sound to a new level.

Chatting to Her.ie ahead of a gig in Cornwall, Marlene confirms that the band were aiming for an evolution of their previous work with the new record and are happy that the material on Triptych will translate well to live performance.

"The first album has more of a folky rock vibe and we had a brass section and that kind of thing but in one sense, it’s hard to reproduce that live between the five of us. So with the new material, we wanted to have a sound that we could easily produce among the five of us when we are on our own. Triptych is maybe a bit darker, the sound has definitely evolved and I think it’s more of a rock-pop album," she says.

"I suppose one of my main influences would be Leslie Feist. She’s just really interesting. I love the production on her albums and the way she brings in percussion and then it fades out and comes back in again. Pat is a big fan of Tom Waits so they would be old influences that we would have had. I think reading material and your own life experiences would be a major contributor too."

Facing into the daunting prospect of releasing a new album as an unsigned band, The Hard Ground decided to approach things in a slightly different manner, choosing to release the album as three separate EPs over the course of the year, rather than a traditional long play record.

Marlene says that the band took the decision in order to give themselves as many promotional and touring opportunities as possible and expose their work to a wider audience.

"I think it’s very difficult for new bands, when you don’t have the backing of a label behind you. You don’t have the support that a lot of the bigger bands would have so we had to have a good sit down and think about what we could do to go forward with this album. There were definitely a lot of things we learned from the previous album and things we knew we wanted to do differently," she explains.

"It is very hard when you put months of solid work into something and then one single gets picked up for radio, the next one might not and then that’s pretty much it. You’re touring on the back of that album but there’s only so much touring you can do with one record so at least if you can split it up and hold back, you can hold people’s interest (hopefully!) for a bit longer."

END_OF_DOCUMENT_TOKEN_TO_BE_REPLACED

The first instalment of Triptych (which means "a work of art that is divided into three sections, or three carved panels which are hinged together and can be folded shut or displayed open") has just been released, with lead single Belles and Beaux capturing a noir vocal combined with a swinging 60s beat. Ashes showcases Carey's gravel tones in a more rock influenced track, while Two By Two and the gentle Spies display a lighter side to the band in a beautifully subtle end to a fantastic collection of songs. The Hard Ground will be writing the upcoming EPs while on the road, so the album is being created in real time as the band tour Ireland and the UK. 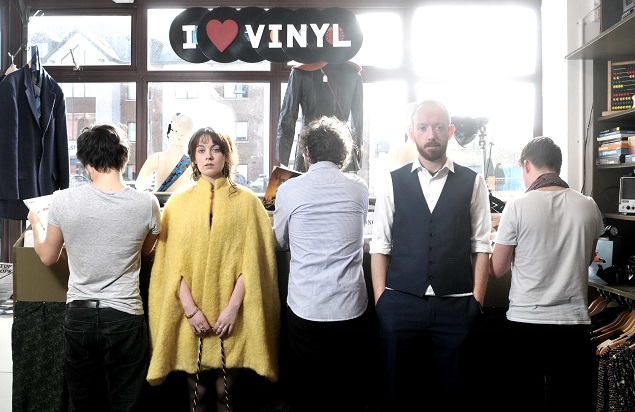 The second part is slated for release in early September, with the third EP due in December. All of the records will be released in digital format only, with a physical album bringing together all parts to be available early next year. The band financed the recording of the album through a majorly successful FundIt campaign and Marlene says that the process has created a sense of community among their supporters.

"It was an experience! You’re always afraid that you’ll fail and if you fail, you’ll fail publicly! You just hope for the best but people were so generous and we got fantastic support for a relatively new band. We know now that we have a pool of people there who are interested in the record, they are invested in it and felt like they were part of it every step of the way. The reaction to the concept of the album has been great as well."

Triptych is out now and The Hard Ground will play Kenny's Bar in Lahinch on Wednesday 4 July and Róisín Dubh (Upstairs) in Galway on Thursday 5 July. See www.thehardground.ie.

popular
"Like botox, but without needles" – I tested Gua Sha, and the results were impressive
Will there be a second season of Gilmore Girls: A Year In The Life? Here's what we know
'Beard-baiting' is now apparently a dating trend - and we're all for it
QUIZ: How well do you really remember the first episode of Sabrina The Teenage Witch?
The Queen has banned Meghan Markle from wearing any of Princess Diana's jewellery
QUIZ: Can you name all 32 counties in Ireland in under 4 minutes?
Dirty Dancing officially arrives on Netflix today and that's our Sunday sorted
You may also like
3 days ago
Soda Blonde: "So much talent has been highlighted over lockdown, we need to start supporting our own"
5 days ago
Irish Women in Harmony planning Christmas single, looking for girls under 12 to join them
1 week ago
Are you looking for an insanely talented female or non-binary musician? This directory is for you
1 week ago
Hozier is raffling off a virtual coffee date with himself in aid of charity
2 weeks ago
Wild Youth just released a new track and we can't stop singing it
2 weeks ago
Stormzy debuts new music video at north Dublin school
Next Page