Hozier just dropped his new music video, and he looks absolutely TERRIFYING in it

Hozier has today shared the video for Dinner & Diatribes, taken from his new album Wasteland, Baby!

And lads, it's so creepy. END_OF_DOCUMENT_TOKEN_TO_BE_REPLACED

The video features actress Anya Taylor-Joy, best known for her roles in the films The Witch, Split and Glass and was directed by Anthony Byrne. His credits include Darkness, Peaky Blinders and Ripper Street.

In the video, we're not entirely sure what the hell is happening.

But Hozier is wearing a grill, has slicked back hair, and there are quite a few animal corpses. 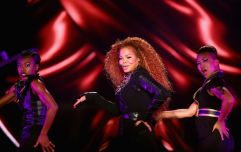 Janet Jackson has announced she is expecting a baby

END_OF_DOCUMENT_TOKEN_TO_BE_REPLACED

You kind of just need to see it.

Speaking about the track, Hozier said:

“This was a fun track to write. I had the riff for it for a long time, a riff that I hadn’t written anything for. The lyrics lament boring company and focuses on the places you just want to leave.”

Released last Friday, Hozier’s new album Wasteland, Baby! is set to debut at the top of the Irish Album Chart this Friday.

The album was recorded between studios in Dublin, London and the US and was co-produced by Hozier, Markus Dravs, Rob Kirwan, and Ariel Rechtshaid.

Watch the new video here, and let us know your thoughts...

popular
Traditional names such as Mary, Maureen, John and Michael may soon be extinct
Toddler drowns in swimming pool while on holidays in Costa Blanca
The 2 Johnnies share unbelievable catfish ordeal as woman 'targets 40 people'
This is how much Kourtney and Travis' wedding cost
Singer Cliona Hagan marries Simon Sheerin in Athlone ceremony
Kevin Spacey charged with four counts of sexual assault against three men
Vogue Williams opens up about being cheated on by "asshole" boyfriend
You may also like
7 hours ago
Toddler drowns in swimming pool while on holidays in Costa Blanca
3 weeks ago
Kylie Jenner gives first glimpse of new son in Met Gala vlog
1 month ago
Irish influencer Claudine Kehoe welcomes her first child
1 month ago
Kylie Jenner felt "rushed" and still hasn't settled on son's name
1 month ago
Glee actor Darren Criss welcomes first child with wife Mia
1 month ago
Cardi B shares first pictures of her seven month old son and finally tells us his name
Next Page