It's the year of R&Bieber, apparently.

2020 comes with the promise of many things.

A new decade. A new you. And a new Justin Bieber album.

The Canadian singer last month announced his fifth studio album, along with an upcoming tour and a YouTube mini series - because why not?

And as if that wasn't enough upcoming Bieber to wet our collective whistle, he's also just gone and dropped his first solo track in five years - 'Yummy.'

Detailing his desire to engage in activities that are, indeed, yummy, Bieber's hot new track is all about the subject that most pop music tends to involve riding. 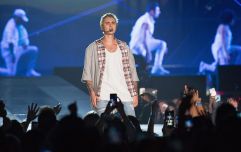 END_OF_DOCUMENT_TOKEN_TO_BE_REPLACED

"As humans, we are imperfect," Bieber said, announcing the upcoming new music and series.

"My past, my mistakes, all the things that I’ve been through, I believe that I’m right where I’m supposed to be and God has me right where he wants me.

"I feel like this is different than the previous albums just because of where I’m at in my life. I’m excited to perform it and to tour it. We all have different stories. I’m just excited to share mine."

Have you seen the trailer for #seasons yet? On @youtube now. #2020 #kidrauhl

You can listen to 'Yummy' here:

popular
Curtain bangs are trending - here's everything you need to know
'Beard-baiting' is now apparently a dating trend - and we're all for it
QUIZ: How well do you really remember the first episode of Sabrina The Teenage Witch?
Cristiano Ronaldo has been called 'racist' for his latest Instagram post
Kate Middleton has addressed the rumours that she's pregnant with her fourth child
Will there be a second season of Gilmore Girls: A Year In The Life? Here's what we know
15 tattoo ideas you'll adore if you love the sea
You may also like
7 months ago
Hailey Bieber has opened up about the 'struggles' she and Justin faced in their first year of marriage
7 months ago
Justin Bieber has revealed a 'crazy scary' battle with drugs in his new documentary
8 months ago
Justin Bieber just posted the sweetest message about loving his wife, Hailey
8 months ago
Justin Bieber takes to social media to tell followers of his Lyme disease diagnosis
8 months ago
Hailey Bieber opens up about social media cruelty in emotional Instagram post
8 months ago
Justin Bieber drops trailer for new docuseries that will show a 'full circle' look at his life
Next Page