To celebrate the 1 year anniversary of his hugely successful album Deli Daydreams, Dublin rapper Kojaque will give a special performance in Whelan's on February 23.

Kojaque (AKA Kevin Smith) will perform the Choice Music Prize nominated album live with a full band at an intimate gig and it looks set to be unmissable.

His debut album is:

"A conceptual project chronicling a week in the life of a Deli worker. The project meanders through the daydreams of Kojaque, the main protagonist, as he contemplates love, life and loneliness in the lead up to the annual work Christmas party. The project is a vignette of working life in Dublin, mundanity, madness and escapism."

The gritty, intelligent and compelling style of the Dublin artist's music has seen his popularity soar over the last year and his live shows have rave reviews from fans and notable people in the music industry, such as Nialler 9. 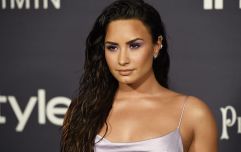 Demi Lovato has just announced she is coming to Dublin's 3Arena

END_OF_DOCUMENT_TOKEN_TO_BE_REPLACED

As an established film-maker and visual artist as well as a musician, Kojaque’s multi-media performances are unlike anything else in Irish hip-hop. It is honesty that consolidates his thoughtful, intelligent, cohesively human tracks.

Tickets for the Whelan's gig start at €21 and go on sale Monday, February 11 at 9am. We're guessing they're going to sell out really quickly though, so act fast!

popular
PERSONALITY QUIZ: Which Normal People character are you?
From Miami to Mallow: The Irish Instagram star who's renovating an old post office during lockdown
The Skin Nerd on updating your lockdown skincare routine, and picking spots - if you HAVE to
5 ways you can help the George Floyd protesters and Black Lives Matter movement
I tinted my eyebrows with fake tan - and other TikTok beauty hacks you should know
After days of silence, Scott and Sofia finally comment on the break up rumours
So, William and Harry have a step sister... and who knew?
You may also like
2 months ago
Gin, coffee, cocktail competitions and more - get your food and drink on at Dublin Drinks Mixer
4 months ago
Want to actually 'do it yourself' when it comes to DIY? The Gaff Goddess is holding a Dublin event to answer all of your questions
6 months ago
[CLOSED] PSA: There's a free Christmas event where you can learn how to make a gorgeous festive wreath
6 months ago
Christmas is coming and Taste of Dublin is celebrating it with oodles of Xmas goodies
10 months ago
Girls With Goals Live is coming to Elle's Bar and we're going to help you reach your goals!
11 months ago
Get your free tickets to watch the Women’s World Cup final with PlayXPlay
Next Page