When we heard Calvin Harris and Rihanna were reuniting to create yet another dance-pop banger we were elated.

They first collaborated on the classic We Found Love from her Talk That Talk album in 2011: 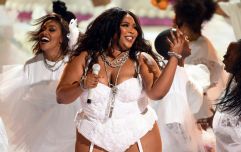 Lizzo got a standing ovation from Rihanna after her 'Truth Hurts' performance and yeah, same

END_OF_DOCUMENT_TOKEN_TO_BE_REPLACED

Now they're back with what is bound to be one of the songs of the summer.

The track's called This Is What You Came For, and it's *fire emoji*.

It's got a tropical house flavour (what pop song doesn't at this point in time), and Rihanna's vocals are top notch as always.

Did you miss Taylor Swift plugging her boyfriend's new track at Coachella a couple of weeks ago? Subtly done.

Anyway, it's a megabanger, and it will probably be a staple for nights out for the next fews months to come.

Listen to the full song on Spotify.

This @CalvinHarris & @Rihanna record is incredible ...

You can buy 'This Is What You Came For' ft. Rihanna by Calvin Harris on iTunes now https://t.co/bnksityz2n

popular
Deborah James "scared to go to sleep" as she receives hospice care
First Dates Ireland is officially looking for new singletons to join the show
Traditional names such as Mary, Maureen, John and Michael may soon be extinct
Tributes paid after Love/Hate actor Stephen Clinch dies aged 52
Wagatha Christie: Rebekah Vardy storms out of court just 30 minutes into final day
€500 to be given to Alopecia sufferers and cancer patients for wigs and hairpieces
Irish mum shares "harrowing" experience after kids almost abducted in Turkey
You may also like
2 weeks ago
Did Rihanna and A$AP Rocky *actually* get married in his new music video?
3 weeks ago
Rihanna shuts down the Met Gala without even attending
1 month ago
A$AP Rocky detained at LAX in connection to November 2021 shooting
1 month ago
Rihanna forced to defend maternity style after being labelled "indecent"
3 months ago
Fans are convinced they know Rihanna's baby's gender already
3 months ago
Rihanna is expecting her first child with A$AP Rocky
Next Page