Turns out he's our type on paper.

To the strains of a Bond-like opener – all moody strings and bursts of brass – Michael Bublé slid onto the stage at Dublin's 3 Arena last night. Having shaken and stirred the audience with his mere presence, the Canadian singer belted out an edgy rendition of Nina Simone's Feeling Good.

As he caressed the bass notes – and, rather suggestively, the microphone stand – the crowd went wild. "Get it off you!" screamed a woman seated behind me, presumably in reference to Bublé's sharp suit, in the kind of blue that Irish men would only ever sport on their wedding day. (Bublé would later joke that he looked like a Smurf after catching sight of himself on a fan's camera.)

END_OF_DOCUMENT_TOKEN_TO_BE_REPLACED

"We're going to start off slow and romantic, and if it goes well it will be like an episode of Love Island – we are gonna do it in a hot tub!" he said by way of introduction to what lay ahead.

Just when it seemed the we were in for a steamy night, the mood was flipped for Bublé's second song – a cute and cheery rendition of his hit Haven't Met You Yet. Not too many artists can risk putting out what is arguably their biggest track in the second slot of a setlist, but then that's exactly what makes An Evening with Michael Bublé so good – there's nothing predictable about this show. 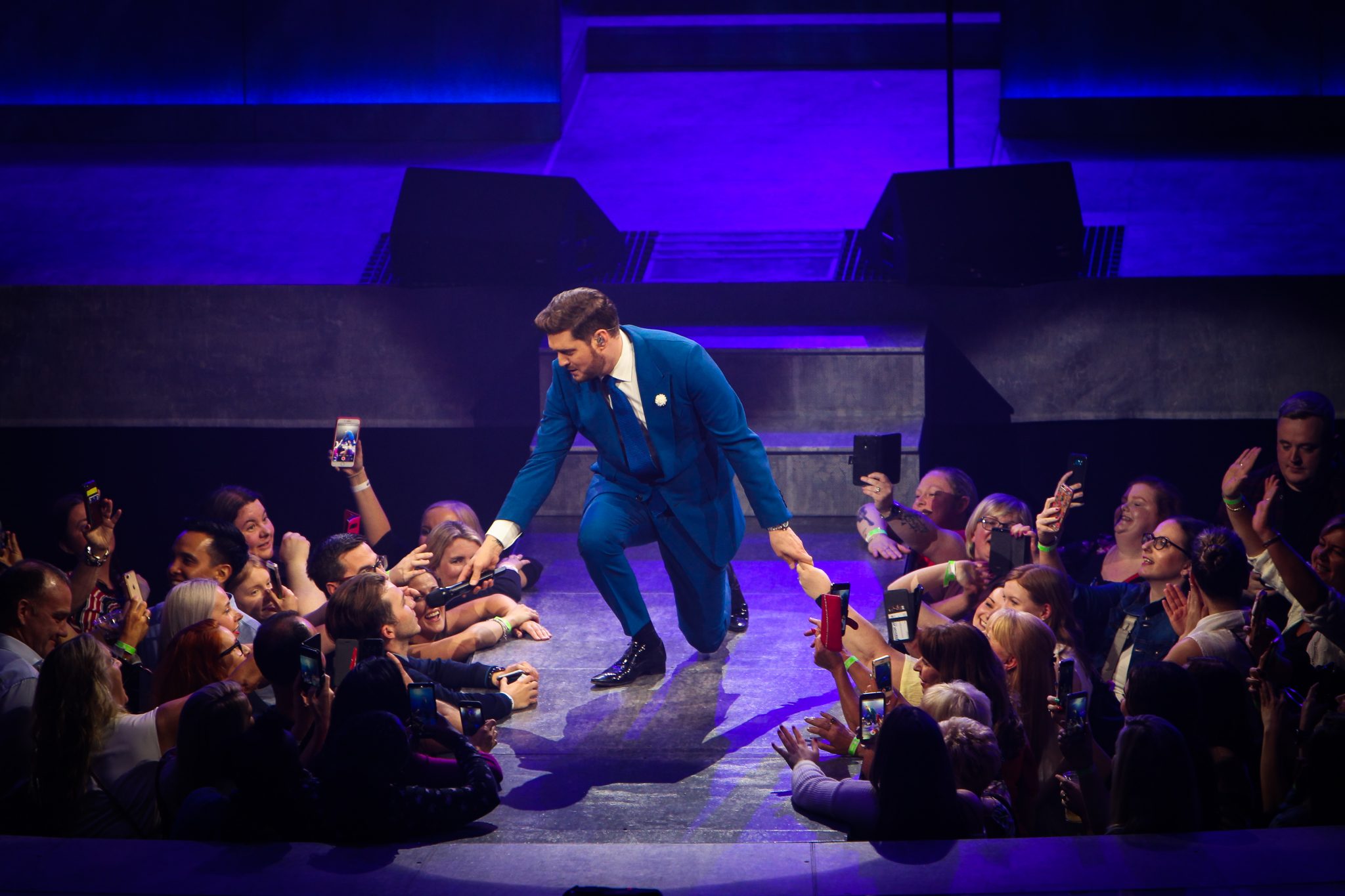 One minute Bublé was thrusting and gyrating as he channeled Elvis, the next he was telling heartwarming stories about how his parents met. He gave an enthusiastic tourist's report of going on Dublin's Viking Splash Tour (yes he wore the hat), then deadpanned having kids had turned him into a "prison bitch". He dropped to all-fours to pose for the bank of cameraphones below, then took a swig of a fan's pint.

He SANG A DUET WITH A PENSIONER at her first Bublé concert and the whole arena melted. Mary, whenever you are, you're a legend.

A very special moment for MARY at her first concert with @michaelbuble . He has the touch #whataperformer #amintears

The backdrop to all of this was a stonking set of Rat Pack and classic jazz love songs of the kind that Bublé never fails to deliver. As someone raised on a diet of Dean Martin and Andy Williams, it was a treat for me to hear these songs the way they were meant to be played by the big band/mini orchestra on-stage.

END_OF_DOCUMENT_TOKEN_TO_BE_REPLACED

popular
Irish person dies after drowning in Spanish resort swimming pool
Love Island's Danica said she felt "disrespected" in the villa
Andrew McGinley says he is seeking a divorce from Deirdre Morley
Search underway in Ireland for missing 11-year-old Ukrainian girl
Everything we know about Love Island USA's Irish premiere
Dami explains why he was "angry" during the Love Island reunion
Galway dog charity sees surge in owners surrendering dogs
You may also like
1 month ago
Adele fans have 'mad respect' for her after she stopped her Hyde Park gig to help someone in distress
1 month ago
Lizzo pledges $1 million for Planned Parenthood and abortion funds
1 month ago
UK lined up to host Eurovision 2023 after organisers rule out Ukraine show
1 month ago
Sinéad O'Connor cancels all live dates for 2022 due to "continuing grief"
1 month ago
Joker 2: Lady Gaga reportedly in talks to play Harley Quinn in sequel
2 months ago
Mariah Carey sued for $20m over All I Want For Christmas Is You
Next Page