I DON'T WANT A LOT FOR CHRISTMAS, THERE IS JUST ONE THING I NEED.

A number one spot on the US top 100 Billboard chat after 25 years of trying to make it there, tbh.

And finally, finally, after a quarter of a century, Mariah Carey has done herself just that and made it to the top of the charts with her most iconic and heart warming song, 'All I Want For Christmas Is You.'

The singer broke the news herself on Twitter this week, revealing that after months of campaigning, years of belting out the same lyrics, and one million tonnes of fake snow, she had finally done it.

END_OF_DOCUMENT_TOKEN_TO_BE_REPLACED

"We did it," Carey confirmed, alongside a couple of crying emojis. Fair play to her.

The first time the iconic track was released all the way back in 1994 (honestly), it was an EP, so it wasn't physically able to be entered in the Billboard chart.

In 2000, the song was eventually re-released as a single, meaning that it could - for the first time - rise up the charts.

Since then, Carey's fans, Christmas fans, and just fans of wholesome content in general have made it their mission to get 'All I Want For Christmas Is You' to No.1 in the States.

And now they've finally done it. What a day. 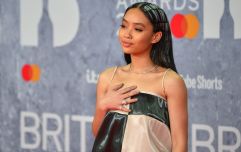 END_OF_DOCUMENT_TOKEN_TO_BE_REPLACED

Carey chatted about the track in an interview with The New York Times, saying that after years of sort of being embarrassed by the song, she's now able to enjoy it.

"It's something my die-hard fans think about, and people that are really close to me are talking to me about it literally all year," she said.

"But I don't need something else to validate the existence of this song. I used to pick it apart whenever I listened to it, but at this point, I feel like I'm finally able to enjoy it."

popular
Fashion house Dolce & Gabbana is 'sponsoring' Kourtney and Travis' Italian wedding
Wagatha Christie: Rebekah Vardy storms out of court just 30 minutes into final day
'She was always in awe of celebrity' – Rebekah Vardy's ex-husband speaks out
James Arthur says his relationship with this celeb made him a sex addict
Why Are Men so Obsessed With Boobs? The Answer is Pretty Surprising...
How to INSTANTLY unblock your stuffy nose (we swear this works)
Only a matter of time before monkeypox spreads to Ireland, says expert
You may also like
6 days ago
The six Eurovision countries with "irregular voting patterns" have been revealed
1 week ago
Eurovision producers reveal "irregular voting patterns" during Saturday night's final
1 week ago
Nick Cave pays tribute to son Jethro, who has passed away aged 31
3 weeks ago
Music festival in honour of Caroline Flack to take place this summer
1 month ago
"It means everything to me:" Sigrid on her upcoming album and learning to let go
1 month ago
Becky Hill: "I love the Irish, they’re one of the friendliest people around"
Next Page