Prepare to indulge your 2002 self, Avril Lavigne has a new album and it's coming out soon

The Sk8er Boi hitmaker is releasing new music in February.

Along with Groovy Chick paraphernalia, Lizzy McGuire and Sunny D, nothing harks us back to the good ol' pre-teen days than the sound of an Avril Lavigne banger.

Avril's debut album, Let Go in 2002 had hits like Sk8er Boi and Complicated and we were ALL about it.

It's been quite some time, five years in fact, that the Canadian singer has released new tunes but she's making a comeback in 2019.

I’m so excited that I can finally share with you, that my new album will be released on February 15, 2019. You can pre-order #HeadAboveWater at link in bio ?

The 34-year-old took to social media yesterday to announce that her new album, Head Above Water will be released on 15 February next year.

On Twitter, fans went mad announcing they had already pre-ordered and were keen for the singer to announce tour dates.

2019 IS ALL YOURS QUEEN pic.twitter.com/l0ED0NkjNg 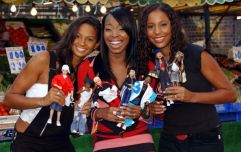 END_OF_DOCUMENT_TOKEN_TO_BE_REPLACED

She has already released the first single from the album called Tell Me It's Over and while it's not the absolute tune that Sk8ter Boi is, we're hoping there will be a few punk bangers in there.

The singer's five-year hiatus was due to illness. She contracted Lyme disease, which has a range of symptoms and can leave the sufferer feeling exhausted.

We're delighted she seems back to good health and is back on the music scene. Hopefully, we'll have a few new guilty pleasures to be listening to in 2019.

Girls With Goals || Her · Ep.151: 'A Story Shared' - Aoife P. Rafter on blogging during a pandemic and living with CF
popular
"I tried to imagine how we’d heal:" Meghan Markle discusses miscarriage in candid opinion piece
Love Island's Maura Higgins and Chris Taylor are officially together
Princess Diana's brother isn't happy with The Crown's depiction of his sister's marriage
Camilla receiving online abuse following The Crown's depiction of Prince Charles affair
Zoe Alexander Says X Factor Made Her Look Like a 'Fool'
"I don’t know where I’d be without her:" Paul Mescal chats new girlfriend in candid new interview
AOC weighs in on Harry Styles' Vogue cover, says he looks "bomb"
You may also like
11 months ago
Remember the Toy Show's JohnJoe Brennan? He's going to be on RTÉ One tomorrow night
1 year ago
Nelly, Shaggy and more are coming to Dublin for the ultimate throwback tour
1 year ago
Holly Willoughby shares school throwback and OMG, the cuteness
1 year ago
Miley Cyrus shared this SERIOUS throwback with Liam Hemsworth and my heart hurts
1 year ago
Scarlett Moffatt just shared a selfie from ten years ago, and she looks SO different
1 year ago
Courteney Cox shares emotional Friends throwback from before the show ever aired
Next Page