R&B's Melina Malone: "Girls are pitted against each other, we're compared constantly"

"A lot of girls are pitted against each other, we're compared to each other constantly."

When it comes to women in music, things are changing.

Irish women are getting more radio play, more listens, and finally, more recognition for their talents. Furthermore, they're supporting each other all the way.

This week, we caught up with Irish R&B star, Melina Malone to chat about her new single, Realize, and the internal support she has witnessed in the industry.

"A lot of girls are pitted against each other and we're compared to each other constantly," she tells Her.

"Because I'm an R&B singer I would be compared to every other female here in Ireland, it's such a small pool. You don't get that with men."

Melina was part of RuthAnne Cunnningham's Irish Women in Harmony group, who released their popular cover of The Cranberries' Dreams over the summer. The R&B star found that most women she spoke with had also experienced being compared to others.

"We're stronger together," she says. "We've become each others' cheerleaders. We're all supporting everyone and what each of us does." 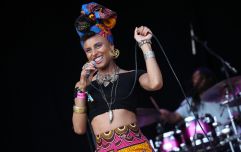 END_OF_DOCUMENT_TOKEN_TO_BE_REPLACED

"This song [Realize] is really special to me because it has a really powerful message for other women," she says. "I hope that it gives people a bit of a lift."

As for releasing new music during the pandemic, Melina says: "It was nice in a way to keep busy and have stuff to look forward to. I was devoid of inspiration for a long time." During this second lockdown she tells us, "I've been feeling more inspired."

"I think people will always find solace music and that's something that's been really keeping me going. Even if it means something to one person, that's enough for me to put a song out and continue to release music."

Melina's new single, Realize, is out now on all streaming platforms.

Girls With Goals || Her · Ep.161: Feeling Peachy - Sharon Keegan of Peachylean on being an absolute BOSS!
popular
Bride dislocates her leg during her first dance in viral clip
Emilia Clarke is set to be the next Marvel superhero
Jennifer Lopez and Ben Affleck just became Instagram official
Cristiano Ronaldo has been called 'racist' for his latest Instagram post
Met Éireann issue thunderstorm warning amidst heatwave
Goodbye McDreamy! Disenchanted officially wraps filming in Enniskerry
Love Island's Dr Alex marks one year anniversary of brother's passing
You may also like
4 months ago
Cork business release 'Mnawesome na hEireann' hair clips featuring iconic Irish women
1 year ago
10 struggles that women with big boobs like mine will understand
2 years ago
68 percent of Irish women said they'd wait this long before dating after a breakup
2 years ago
Irish women are the fourth heaviest drinkers in the world, study finds
2 years ago
Azealia Banks is now calling Irish people 'inbred' while also mocking the famine
2 years ago
Irish women rank pretty high when it comes to the amount of alcohol we drink
Next Page