The 'Nothing Compares 2 U' singer said on Twitter this week that two more extra gigs are going to be added to her upcoming tour next month.

At the time of writing, the location of the additional dates has yet to be revealed.

She announced her comeback to music earlier this year, and appeared on The Late Late Show last Friday to give audiences a taste of what to expect from her upcoming tour. 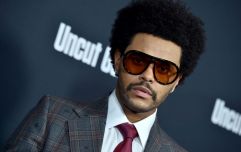 END_OF_DOCUMENT_TOKEN_TO_BE_REPLACED

The singer also discussed her recent reverting to Islam, explaining how the shift in faith came about.

"The word revert refers to the idea that if you were to study the Quran you would realise that you were a Muslim all your life and you just didn't know it," she said.

"I'm 52 and I grew up in a very different Ireland to the one that exists now. It was a very oppressed country, religiously speaking, and everybody was miserable. Nobody was getting any joy in God.

"Then when I read chapter two alone of the Quran I realised, oh my God, I'm home."

Additional dates for O'Connor's gigs are expected to be announced on September 20.

popular
These sustainable Irish sweaters are making people smile, and they're back in stock tonight!
A Tyrone midwife was chosen to feature on the cover of Vogue
Aldi to sell reusable face masks from Thursday onwards
Love Island will be airing this summer - the Australian version, that is
Get ready to live like the stars because Lidl is selling an entire home cinema range
Brown Thomas and Arnotts to phase reopening from next week
Here's what happens on every day of your menstrual cycle (roughly)
You may also like
6 days ago
Britney Spears has gifted us a new song, securing her status as a true lockdown icon
1 week ago
WATCH: Halsey says new album helped her "make peace" with her bipolar disorder
2 weeks ago
Ranked: Ireland's top 10 Eurovision entires of all time
4 weeks ago
Norwegian popstar Dagny has released a new summer song and it's an absolute TUNE
1 month ago
The Irish artist's viral song giving expats stuck abroad a taste of home
1 month ago
Good news: The Spice Girls are officially in talks for upcoming gigs
Next Page