Taylor Swift recently announced that she would be rerecording her early albums and it looks like the first of these new albums will be available very soon.

Swift's decision to rerecord her albums came about due to multi-million-dollar acquisition of her original masters by Scooter Braun in 2019.

As a big Taylor Swift fan I wondered which album from her early line up she would release first and it seems that the wait is over as Swift posted on social media earlier today with the news that all us Swifties have been waiting for.

The 31-year-old musician posted the announcement on her Instagram revealing we can listen to the all new Fearless (yes head first fearless) tonight!;

"I’m thrilled to tell you that my new version of Fearless (Taylor’s Version) is done and will be with you soon. It has 26 songs including 6 never before released songs from the vault. Love Story (Taylor’s Version) will be out tonight."

As well as recording the original tracks from Fearless (and recreating the iconic cover shot) Swift also revealed that there will be six brand new, never before heard tracks being added to her verison of the album. 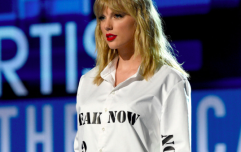 END_OF_DOCUMENT_TOKEN_TO_BE_REPLACED

I really truly feel like no one has been quite as productive in lockdown as Taylor Swift as not only has she rerecorded her beloved Fearless album but last year she recorded two brand new albums as well!

At this rate I wouldn't be surprised if she has all her early albums and another brand new one out by the end of 2021.

Swift has a link in her Instagram bio titled Fearless Taylors Version but currently it only links to her Folklore store but I'll be sure to keep an eye on it as I am absolutely living to hear those new tracks.

popular
Dami explains why he was "angry" during the Love Island reunion
Jacques O'Neill addresses Paige and Adam's relationship on Instagram
Why Are Men so Obsessed With Boobs? The Answer is Pretty Surprising...
John Travolta pays moving tribute to Olivia Newton-John
Barry Keoghan announces the name of his baby boy
Emmerdale actor Sam Gannon dies aged 31
Someone has ranked the penis size of men from all over the world
You may also like
2 months ago
Taylor Swift praises "phenomenal" Conversations With Friends
2 months ago
Joe Alwyn on what Taylor Swift thought of his Conversations With Friends sex scenes
5 months ago
Jake Gyllenhaal has finally revealed what he thinks of Taylor Swift's 10 minute All Too Well
6 months ago
Man arrested after crashing into Taylor Swift's apartment building and trying to get inside
7 months ago
The pop culture moments that defined 2021
8 months ago
Three months is plenty of time to fall in love, and to have your heart broken
Next Page