That Garth Brooks gig may FINALLY happen in Summer 2017

Will his Friends in Low Places make it finally happen?

Following the Garth Brooks-Croke Park saga of 2014, it looks like it's finally time for the country singer to come and give us all the gig of our lives.

Last month, we heard that a viral clip of Enda Kenny rocking out at Bruce Springsteen's gig in Croke Park motivated the country singer and his management to pursue an Irish gig even more intensely.

END_OF_DOCUMENT_TOKEN_TO_BE_REPLACED

According to The Irish Times, the Mayor of Cork has spoke of his confidence in securing not only a Garth Brooks gig, but also an Adele concert in the Rebel county.

Both open air events will reportedly be held in the renovated Pairc Ui Chaoimh, with the Lord Mayor Des Cahill saying he is "very confident" in bringing Garth to his legions of fans.

Looking forward to some big gigs back on Leeside at redeveloped #PaircUiChaoimh #Cork pic.twitter.com/dzivJgcwEH 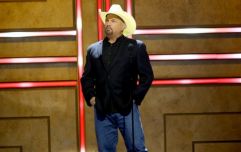 END_OF_DOCUMENT_TOKEN_TO_BE_REPLACED

On The Neil Prendeville Show on Cork’s Red FM, councillor Des Cahill spoke of the whispers within the music industry in bringing Garth to Cork.

Des spoke on the show that his information was sourced from both people from the music promotion industry and the Cork County Board within the GAA.

It was reported before that if Garth played his five shows that he was planned to play in 2014, it would've brought a whopping €60 million to our shores, so Cork would definitely benefit from having the country legend playing there.

popular
Zendaya and Tom Holland are being flooded with rumours they're engaged
Fundraiser set up for boy attacked by pit bull in Wexford
Tasha Ghouri makes it clear that she and Andrew Le Page aren't engaged... yet
3 simple tips to get your nails in shape ahead of Christmas
It looks like Harry Styles and Kendall Jenner could be getting close again
Ant and Dec open up on their real feelings about the 2022 I'm A Celeb cast
The trailer for Channel 4's Vardy V Rooney: A Courtroom Drama has dropped
You may also like
2 months ago
Here's what you can and can't bring to Garth Brooks
2 months ago
A one off stage is being built for Garth Brooks' five Croke Park gigs
1 year ago
"It's easier to get Garth Brooks tickets than a PCR test", Dáil is told
1 year ago
Croke Park residents group say five Garth concerts is "unacceptable"
1 year ago
Garth Brooks might have to move some of his Dublin shows to the Aviva
1 year ago
Garth Brooks gives an update on those Croke Park rumours
Next Page