The Editors, The Kooks, BellX1 and Ash have been announced for this year's Indiependence festival.

Excitement for a festival season is building steadily, as the first load of acts for Indiependence were announced today.

Also on the line-up for the three-day Mitchelstown music festival are The Strypes, Idlewild, Hudson Taylor and The Blizzards as well as King Kong Company, Little Hours and many more.

END_OF_DOCUMENT_TOKEN_TO_BE_REPLACED

The Cork festival, which will take place from July 31st to August 2nd, is in its eleventh year and has firmly cemented itself as a must-attend on the festival circuit in Ireland, after its biggest year to date last year.

We are also very excited to reveal that JOE and Her.ie will be there with bells on with our own Sunday Sessions area, with a stellar lineup to be announced in the coming weeks, so keep an eye out. 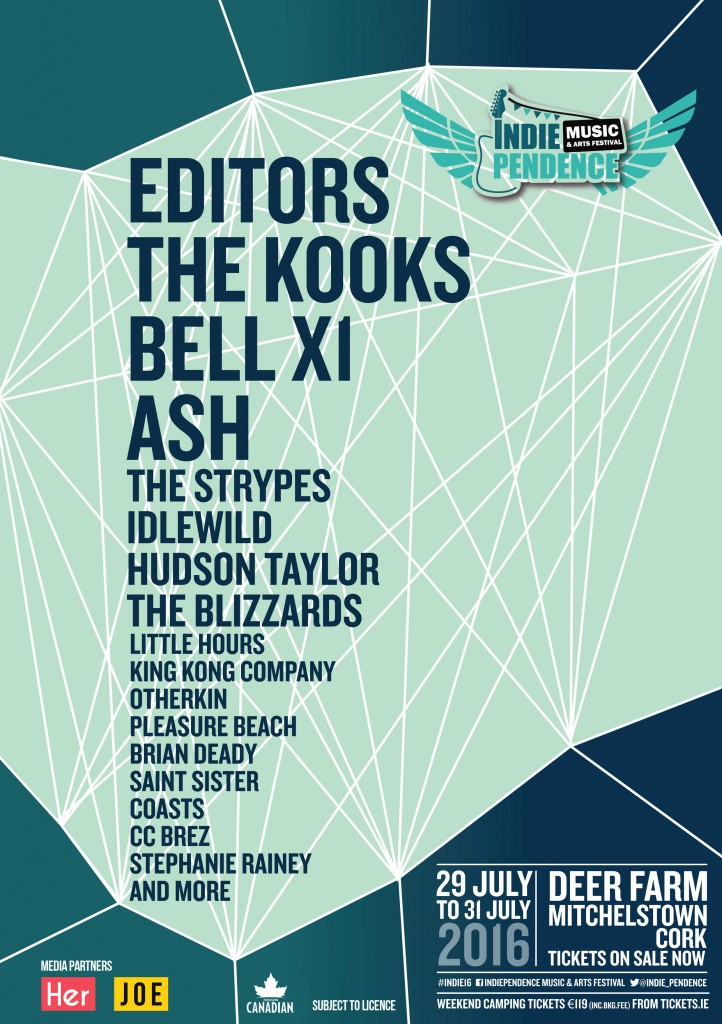 If this looks like your cup of tea, you better hurry, as three tiers of early bird tickets for INDIE16 have already SOLD OUT, with weekend camping tickets for the festival now on sale at €119.

INDIE fans will be happy to see the return of the Beer Hall Stage, Comedy & Spoken Word, the Silent Disco, Festi-Huts and a wide variety of food options over the course of the weekend, with more announcements imminent.

INDIE15 sold out in advance so don't hesitate to visit www.indiependencefestival.com to buy tickets or www.facebook.com/INDIEPENDENCEFEST for more information.

Girls With Goals || Her · Ep.154: Scholarship Squad Take 2 - Smurfit alum Grace Milton
popular
Irish designer "mindblown" as Dr Jill Biden wears dress she embroidered
Someone has ranked the penis size of men from all over the world
Dad designs bikini line for transgender teens
New Zealand set to close its borders for the entirety of 2021
Leo Varadkar says if Ireland introduced mandatory hotel quarantine, it would have to do so for a year
'They're Dead To Me Now' - Kate And Oliver Hudson Have Been Disowned By Their Father
Kylie Jenner just posted a naked snap on Instagram, and people are NOT happy
You may also like
1 month ago
Ariana Grande announces new film with Netflix, Excuse Me, I Love You
1 month ago
I'm Not OK: My Chemical Romance have just released a makeup collection
2 months ago
Irish violinist Patricia Treacy to perform at Joe Biden's inauguration next year
2 months ago
LISTEN: Barack Obama compiles playlist to mark time as president
2 months ago
Fans could be required to prove Covid-19 vaccination or test for concerts
2 months ago
Kanye West presents Kim Kardashian West with hologram of her late father as birthday gift
Next Page