The most unwanted music albums as Christmas presents have been named

Adele won't be chuffed with this news.

While it sounds ungrateful, we've all had presents we haven't necessarily liked.

When someone gifts you with something you didn't expect, we've all had that moment where we've feigned a smile and nodded enthusiastically, claiming to love our present when really we've no idea why we got it at all.

According to METRO, one present in particular that people haven't exactly warmed to is a music album, with 5 albums named as the most unwanted present.

Musicmagpie.com, a second-hand product buying site reported that (of all albums) Adele's 25 album was traded over 30,000 times after Christmas Day. 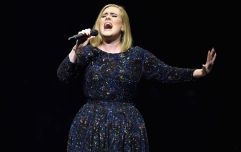 Adele is taking a ten year break from touring

END_OF_DOCUMENT_TOKEN_TO_BE_REPLACED

Other albums coming in as most traded on the site were Justin Bieber's Purpose album (25,000), NOW! 93, One Direction's Made in the AM and Coldplay's A Head Full of Dreams.

The 5 most unwanted DVDs that were mostly traded on Musicmagpie following the Christmas period were Frozen, Spectre, Star Wars: The Force Awakens, Jurassic World and Fast & Furious 7.

Thinking of getting a loved one their 'favourite' album for next Christmas or their birthday? Maybe think otherwise...

popular
It turns out we may have been brushing our hair wrong the whole time
83,000 people uninstalled Covid Tracker App following battery issue
WATCH: Former 'Charmed' actress shows off shocking hair loss due to COVID-19
Everyone wants to know what happened afterwards for Max and Janine on First Dates Hotel
The 2021 Ikea catalogue has been revealed – and it is filled with ideas and inspiration
Three children and two staff test positive for COVID-19 at Meath creche
5 new additions to Netflix to spend your weekend watching
You may also like
3 months ago
Adele stepped out with a stunning new look in her birthday post
7 months ago
We (and Twitter) want to talk about Adele's FABULOUS Christmas look for a minute
7 months ago
Adele shares gorgeous Christmas snap but the reaction to it is incredibly frustrating
9 months ago
Adele fans sent into a frenzy after rumours she is going to release new music next week
10 months ago
Adele has introduced Skepta to James Cordon as 'whirlwind romance' rages on
10 months ago
One Republic's Ryan Tedder says that Adele and Beyoncé collaboration was just a joke
Next Page