Ever settle down for the night and have trouble deciding whether you're going to watch a film or read a book?

Well, you won't have to worry about making any more harrowing decisions like that because this new Spotify game is going to take up your entire life from now until, well, whenever everybody gets sick of it. 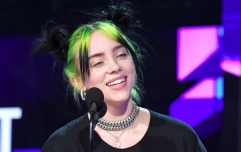 END_OF_DOCUMENT_TOKEN_TO_BE_REPLACED

Top Of The Spots has a simple premise - but oh God, if it's not totally brilliant.

Players are presented with two songs available for streaming on Spotify.

They then have to guess which song out of the two has received the most streams on Spotify. Ever.

It sounds easy enough but lads, you'll be surprised to find that your deeply loved power ballad from the 80s doesn't actually have as many streams as that crap top 10 track that they won't stop playing in Coppers.

Our personal best score is a solid 22 - which may not seem like much, but when you play the game, you'll understand.

This isn't a quiz about music quiz. This is a quiz about fate, and what it means to waste entire evenings of your time in 2019.

You can check out the game here... and play for the next six hours or so.

popular
Gabby Petito disappearance: FBI confirm remains found are that of missing woman
ISPCA issue urgent appeal for over 100 cats and kittens
Germans shocked as cashier killed for asking about a face covering
New 911 call claims Brian Laundrie 'slapped' and 'hit' Gabby Petito
Designer Tom Ford's husband of 35 years dies at 72
Mother reunited with daughter who was abducted in 2007
Tributes paid as Sex and the City star Willie Garson dies aged 57
You may also like
2 months ago
The girls from One Tree Hill have started a rewatch podcast
1 year ago
Laura Whitmore wants to see these Islanders couple up next and people are divided
1 year ago
Spotify is releasing playlists and podcasts for your pets
2 years ago
Cost of Spotify Premium for Vodafone Ireland customers increases
2 years ago
Gals, you honestly need this 'agony aunt' podcast in your life... it will soothe your soul
3 years ago
Kendrick Lamar has reportedly threatened to pull all of his music from Spotify
Next Page