VIDEO: Ellen Takes On Nicki Minaj in a Parody of 'Anaconda' and It's Hilarious

It’s been the talk of the music industry since it was released, but now Nicki Minaj’s Anaconda music video has been taken to a whole new level by Ellen DeGeneres.

The television talk show host parodied the infamous video in a hilarious spoof that is an absolute must-see.

Nicki's original video broke records when it got 16.9 million hits in the first 24 hours. The record was originally held by Miley Cyrus for her video Wrecking Ball.

In this hilarious rework of the video, Ellen gets into the spirit of the song, twerking away to her heart’s content. 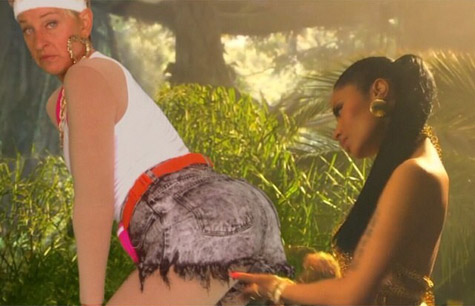 END_OF_DOCUMENT_TOKEN_TO_BE_REPLACED

Meanwhile, Nicki Minaj got a bit of a shock when she was shown the doctored video by Ellen. In fits of laughter, the singer exclaimed: “What did you just do?”

Ellen replied while miming hitting someone's behind with her hands: “What did YOU do? I was just minding my own business and then you do that.”

The video went live on Ellen’s YouTube channel in the last 14 hours and already has more than half a million views.

popular
Anna Delvey is set to be released from prison
Primark reintroduces female-only fitting rooms after two men walk in on woman
Davide Sanclimenti opens up on having kids with Ekin-Su Cülcüloğlu as he turns down Dancing On Ice
Hilary Swank, 48, reveals she is pregnant, expecting twins
I’m A Celebrity bosses ‘sign first Love Island contestant for 2022 series’
People are being warned not to dress as Jeffrey Dahmer for Halloween
The 10 most popular girl names for October babies
You may also like
1 month ago
Michael Bublé considering "quitting" music to focus on family
1 month ago
You can now do a module all about Taylor Swift's music at a Texas university
1 month ago
Too Hot To Handle's Nicole O'Brien: "I only went on it because I wanted to do music"
3 months ago
Adele fans have 'mad respect' for her after she stopped her Hyde Park gig to help someone in distress
3 months ago
Lizzo pledges $1 million for Planned Parenthood and abortion funds
3 months ago
UK lined up to host Eurovision 2023 after organisers rule out Ukraine show
Next Page