WATCH: Sinéad O'Connor smashes 'Nothing Compares 2 U' on Good Morning Britain, gets told off for swearing

Sinéad O'Connor can say whatever she likes, thanks.

After an incredible comeback performance two weeks ago on The Late Late Show, Sinéad O'Connor performed 'Nothing Compares 2 U' on ITV's Good Morning Britain.

Accompanied by nothing but a piano, O'Connor proved once again that her voice has lost nothing to age.

Watch the clip below and settle in for five minutes of another luscious, note-perfect, heart-rending performance from the Irish songstress.

Host Susanna Reid said being joined by O'Connor was, "One of the best Monday morning's we've had."

O'Connor, who also goes by the name Shuhada Sadaqat, also sat down for an interview with hosts Reid and Piers Morgan.

During the chat, she joked about writing a break-up song called 'Nothin Compares 2 U, you bastard', prompting Morgan to apologise to viewers and tell Sinead she can't swear on "breakfast telly."

Thankfully, Reid stepped in and said, "But it's Sinéad O'Connor," which is the correct response, because she can say whatever she likes, and nobody, not least Piers Morgan, is going to lecture her on what can and can't be said.

Asked had she ever met Prince, the writer of 'Nothing Compares 2 U', O'Connor said: 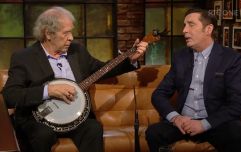 END_OF_DOCUMENT_TOKEN_TO_BE_REPLACED

"We didn't get on. We tried to beat each other up. Well, really, he tried to beat me up and I was defending myself. It's not a joke, no. It was a very frightening experience."

O'Connor went on to tell the story of how at five o'clock in the morning, Prince was chasing her around his car for swearing, trying to punch her while she spat at him.

"He was into some pretty dark drugs," she said. O'Connor noted that Prince and O'Connor's manager at the time were suing each other.

She also said that Prince put one of the female members of his band in hospital with broken ribs.

popular
Trolls target Emma Willis' eight-year-old son over pink clothes and long hair
Mum accidentally names twins after TV show and now wants to change their names
'Lockblocking' is the dating trend all single people are dealing with right now
Government vote to seal mother and baby home records for the next 30 years
I trialled the new products from the Alex Steinherr Penneys range and I have some thoughts
Dublin TikTok house deny staging dance with couple having sex behind them
Lily Allen launches "life-changing" sex toy and yeah, fair play
You may also like
3 hours ago
Young people shouldn't be blamed for Covid spread, says Dr Tony Holohan
1 month ago
Domhnall Gleeson is on The Late Late Show this week
1 month ago
Here’s who’s on the Late Late Show tonight
1 month ago
Irish Women in Harmony will be on tomorrow night's Late Late Show
6 months ago
Brendan Gleeson, Samantha Barry, Dermot O'Leary lead The Late Late Show lineup tonight
6 months ago
The lineup for tonight's Late Late Show has been revealed
Next Page