While his decision to leave One Direction was all about being solo, we thought he would be focusing solely on music.

So it comes as a bit of a surprise that Zayn's newest venture will be in TV. 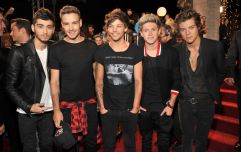 END_OF_DOCUMENT_TOKEN_TO_BE_REPLACED

The singer is teaming up with Dick Wolf, who is the producer and creator of the hugely popular Law & Order franchise.

And while Zayn's move to TV may surprise some people, the topic of the TV drama probably wont.

The hour-long NBC drama is will be titled Boys and will focus on the formation of a hugely successful boy band according to the Hollywood Reporter.

It will capture all the excitement, competition and fun, but will also take an inside look at the pressure that comes with the success.

Is this based on anything specific, Zayn?

“It’s exciting to be diving into this project with such passionate and prolific producers,”

“Zayn certainly brings an authentic point of view to this world where kids are catapulted into fame at a dizzying speed. On top of our excitement around the creative ideas being discussed, we have a lot of respect for the musical and digital ambitions behind the project.”

“Dick Wolf is a legend and the opportunity to work with him and NBC to create a compelling drama series is awesome,"

No news on when exactly this show is set to air, but we're betting it will be quite popular.

Girls With Goals || Her · Ep.151: 'A Story Shared' - Aoife P. Rafter on blogging during a pandemic and living with CF
popular
The son in The Undoing is the real life child of Corrie star Katy Cavanagh
'I loved it': The childhood drug addiction that inspired The Queen's Gambit
Met Éireann issue "severe" 55-hour weather advisory
24 hour Penneys: Here's what you need to know about the store's reopening
Barack Obama says he "screwed up" not giving Dolly Parton a Presidential Medal of Freedom
Rosanna Davison: "It feels like the biggest miracle after our fertility struggles"
This is how you can protect your Instagram account from that Ray-Ban scam
You may also like
4 months ago
A definitive ranking of One Direction’s 10 best singles
7 months ago
Liam Payne says One Direction are planning a special project to celebrate their 10th anniversary
10 months ago
Harry Styles apparently now making six times more than his One Direction bandmates
11 months ago
Liam Payne says One Direction might get back together in two years, maybe
1 year ago
Oh SNAP! Harry Styles threw some serious shade at Zayn Malik last night
1 year ago
One Direction's Louis Tomlinson is embarking on his first ever solo tour
Next Page