As 41 children die in a fire in Siberia, thousands take to the streets in protest

In the Siberian city of Kemerovo, 3,600km east of Moscow, thousands of angry citizens have taken to the street.

They are protesting against the circumstances that led to the deaths of 64 people. It is believed that 41 of the dead are children and the BBC cites relatives who say that 85 people - also mainly children - are still missing.

Another family member said that trapped youngsters were calling their parents desperately begging for help and asking for emergency services to be sent in. 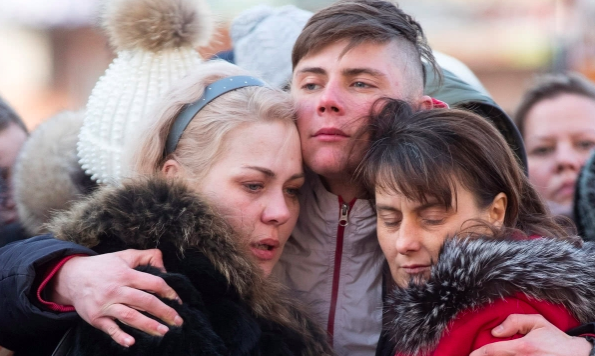 END_OF_DOCUMENT_TOKEN_TO_BE_REPLACED

The fire broke out in a leisure complex; President Vladimir Putin has blamed "criminal negligence" for the tragedy, which took place on Sunday.

Igor Vostrikov lost his wife, sister and three children - aged two, five and seven - in the fire. The BBC quotes him as describing his wife's last moments when she phoned him: "There was no panic - she was saying goodbye." He added: "I have nothing more to lose."

Investigators say fire alarms were switched off or were broken and that exits were blocked; there are now calls for senior officials be sacked over the safety shortcomings.

Photo: Russian president lays flowers in tribute to the 64 victims of a fire at a shopping centre in Siberia pic.twitter.com/RdUxS0HKnr

Sunday's blaze started on an upper floor of the leisure complex at about 5pm local time (10am Irish time). It was the beginning of the Easter holidays, so the mall's shops, cinema and bowling alley were all packed.

END_OF_DOCUMENT_TOKEN_TO_BE_REPLACED

The shopping centre covers 23,000 sq m and opened in 2013. It includes the likes of trampolines and a petting zoo; all the animals have also died.

A criminal investigation had now begun and on Wednesday, a day of mourning will be held throughout Russia.

popular
Rob Kearney and Jess Redden arrive at wedding venue ahead of big day today
Irish man in his 20s dies after being kicked by a horse
Stacey Solomon mortified after walking around shop in see through leggings
Tributes paid to 29-year-old Irish woman who tragically passed away on holidays
These are the most popular baby names for 2021
Toy Show DJ brothers to return on Friday night's Late Late show
Vicky Phelan says she wants to pass away in holiday home "for the kids' sake"
You may also like
1 day ago
DSPCA and Gardaí rescue over 30 puppies and dogs from Dublin apartment
2 days ago
Norma Foley addresses concerns over schools staying closed in January
2 days ago
An Post reduces gender pay gap from 3.7% to zero
2 days ago
Woman's body discovered in Co Clare waters as investigation launched
2 days ago
Celebrations as Ireland make history beating Georgia 11-0 in World Cup Qualifier
2 days ago
Weather warning issued to motorists ahead of "unpredictable" conditions
Next Page