A few weeks ago it was reported that department store Brown Thomas was applying for a full pub licence.

Saurya Cherfi and Ray Managh reported for the Irish Times that the refurbishment on the third floor of the store had been carried out in accordance with planning permission.

The court heard that Brown Thomas had been serving wine for the last 40 years in its restaurant and wished to extend more variety to its customers, particularly those who had to wait around while their spouses and partners indulge in a little retail therapy. 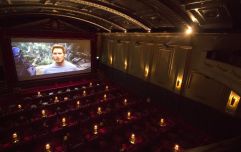 Dublin cinema named best cinema in all of UK and Ireland

END_OF_DOCUMENT_TOKEN_TO_BE_REPLACED

The court was told Brown Thomas bought out an extinguished full licence from Falcon Irish Pubs Limited in Limerick, and Constance Cassidy SC, told the judge that the addition of a pub licence could at least anaesthetise the people waiting around against how much their significant others would be spending.

popular
You can now get paid to watch every episode of Grey's Anatomy
POLL: Vote now to see which side you're on in this Irish head-to-head battle
Love Island: You need to see Millie's dad's Instagram
Love Island fans spot Millie and Liam doing same weird gesture in bed
Love Island: Kaz's family issue statement after "vulgar racist abuse"
The islanders are in for a cinematic treat full of their own drama tonight
18-year-old TikTok star Timbo the Redneck dies after stunt goes wrong
You may also like
2 weeks ago
Do not swim noticed issued after e.coli found on Dublin beach
2 weeks ago
Sadness as beloved Dublin café Gerry's shuts its doors after 40 years
3 weeks ago
This luxury Dublin hotel are running some incredible staycation offers this summer
3 weeks ago
9 incredible Dublin outdoor dining and culture spots you need to visit this summer
3 weeks ago
Dubliners have the sexiest accent according to Brits
4 weeks ago
Dublin set to get a new rooftop cinema and restaurant
Next Page