Viewers have reacted angrily to an embarrassing slip-up made by Channel 4 on Twitter.

The mistake happened during its annual Stand Up To Cancer charity special, during which Michael joined James Corden for a round of Carpool Karaoke.

It's absolutely impossible not to smile watching this...

During the segment, the singer spoke about how Noah had been diagnosed with cancer in 2016 at the age of three and how his family had dealt with the little boy's battle.

Noah is now in remission but after the interview, the broadcaster tweeted that Michael talking about "the death of his son from cancer" was "one of the most heartbreaking things we've ever watched". 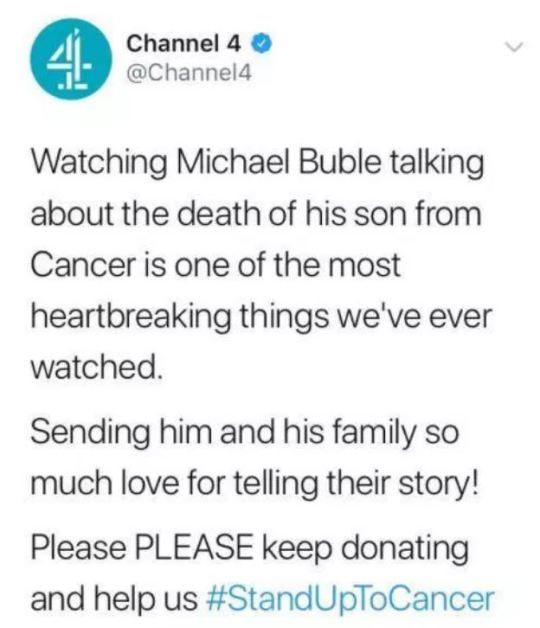 The tweet was deleted almost immediately but was spotted by some Twitter users who urged Channel 4 to take it down.

His son is alive, isn't he? https://t.co/S8VCyEoTPa

His son didn't die. Come on @Channel4 you need to change this

During the interview, Michael broke down in tears as he called Noah a hero for beating the illness.

"I became the strength to somehow pull us and lift us," he told James.

"When they got it out and chemo was done, I just fell. My wife picks me up.

"He is five years old now and I say to him Spider-Man is amazing but they are fake, they are not real. You are my hero, you are my superhero."

popular
There's a Harry Potter themed Airbnb in Roscommon and we just need to visit
Lidl launches own fake tan and it'll only set you back €3.99
Staycation: 7 gorgeous glamping spots for your Irish summer getaway
QUIZ: How well do you remember The Rugrats Movie?
Here's what happens on every day of your menstrual cycle (roughly)
From blonde to brunette - 6 things I wish I knew before going back to my roots
Someone has ranked the penis size of men from all over the world
You may also like
4 days ago
CONFIRMED: Ozark to return for an expanded fourth and final season
1 week ago
QUIZ: How well do you remember the very first episode of The O.C.?
1 month ago
Carole Baskin handed control of Joe Exotic’s zoo in Oklahoma following court case
1 month ago
PERSONALITY QUIZ: Which Normal People character are you?
1 month ago
'It's just reminded me how rich Sally's books are': Normal People producers on adapting Conversations With Friends during lockdown
1 month ago
'That’s the most honest answer': Skeet Ulrich reveals why he is leaving Riverdale
Next Page