Harrowing scenes over the last few months have seen Geoff isolate Yasmeen from her friends and family, with his actions having been - so far - undetected by their neighbours.

Television watchdog Ofcom has confirmed to The Sun that the storyline has sparked 146 complaints across four episodes.

Among the upsetting episodes was one that aired in early February, where Geoff locked Yasmeen in a box for hours after one of this magic tricks had gone wrong. There were 74 complaints about the episode. 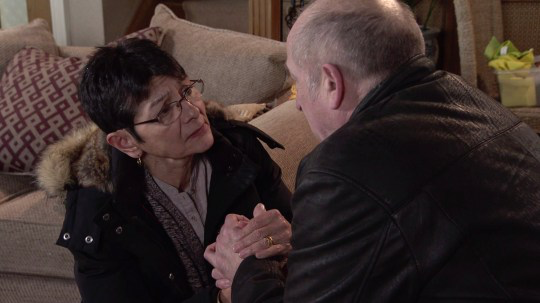 END_OF_DOCUMENT_TOKEN_TO_BE_REPLACED

It comes as Alya Nazir is set to get closer to discovering Geoff's abuse after she hears that her grandmother, Yasmeen, has been spotted crying in the garden while feeding her chickens.

Geoff decides to be evasive when confronted by Alya, but it isn't long before her interest is spiked - and she calls on Yasmeen, asking her to go for a stroll.

Alya tells her that it's clear there's something that's wrong. But will Yasmeen be able to come clean about what has been going on?

Meanwhile, Geoff begins to worry that he may have pushed Yasmeen too far - and he panics, rushing home to look for her passport. After Yasmeen returns home, he tells her that he wouldn't be able to cope without her - and that he was so worried she had left him.

Girls With Goals || Her · Ep.161: Feeling Peachy - Sharon Keegan of Peachylean on being an absolute BOSS!
popular
Harry Styles accepts BRIT for Best British Single - with American accent
Woman buys 148 year old house, goes viral after finding secret passage way
Nine-year-old boy dies after being struck by lightning in UK
Is that Seth Rogen without a beard?
9 Dublin restaurants with outdoor dining we've already booked a table for
Penneys issues statement after shoppers try to sell appointments for €100
The reviews on Brooklyn Beckham's book are absolutely gas
You may also like
1 week ago
15-year-old boy charged with murder of woman in Dublin
1 week ago
"You don't feel like you're sick enough:" Meet the Irish blogger fighting for eating disorder treatment
1 week ago
Hunt underway for man who attacked pregnant woman in Dublin city centre
1 week ago
Unborn baby of woman attacked on Dame Street died after assault
2 weeks ago
"You made me a better man:" Ashley Cain shares tribute to baby Azaylia
2 weeks ago
Ashley Cain's baby daughter Azaylia has sadly passed away
Next Page