Dublin Bus, Luas and DART fares are, once again, going to increase

It was announced today that Dublin Bus, Luas and DART fares are on the rise.

The National Transport Authority made the announcement this afternoon that the standard €2.85 fare will increase to €3. This is for journeys between four and 13 stages. 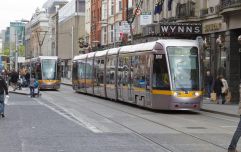 END_OF_DOCUMENT_TOKEN_TO_BE_REPLACED

However, there will be no change to the €3.30 cash fare for journeys over 13 stages.

There will also no longer be a distinction between peak and off-peak Luas Leap fares.

Anne Graham, Chief Executive of The National Transport Authority, said that "a revised fare structure is required for public transport in the city which will support seamless movement between different public transport services and modes without a financial penalty".

She added that "ultimately, there will be a two-fare system comprising a short distance fare and a 90 minute fare" when the new Bus Connects scheme is introduced.

popular
Heavy rain and unsettled conditions forecast for Bank Holiday weekend
Human remains found positively identified as Brian Laundrie
Maria von Trapp's daughter has died aged 90
At least seven bodies have been found in search for Brian Laundrie
Tesco is refunding 27,000 customers after overcharging them
Three month sentence of Garda for domestic violence is "appalling" says Women's Council
This is how much 91-year-old Queen Elizabeth drinks every day
You may also like
1 year ago
Some Luas red line services have been cancelled due to a technical fault
2 years ago
Man dead after being hit by Luas in Dublin
2 years ago
A woman has died after being struck by a Luas tram this morning
2 years ago
A Luas-style tram service could soon be in the pipeline for Cork city
2 years ago
The Luas has confirmed its website has been hacked and held at ransom
2 years ago
These are the new public transport fares that come into effect this weekend
Next Page