“I tested positive on a Saturday, by the Wednesday I was in Beaumont Hospital and on the next Saturday, I was rushed to ICU where I spent 17 nights in an induced coma on a ventilator."

In March this year, at 21-weeks pregnant, Laura Curtis tested positive for Covid-19.

Within days she was in the hospital, where, after her condition deteriorated, doctors decided to put her in an induced coma.

END_OF_DOCUMENT_TOKEN_TO_BE_REPLACED

Speaking on Newstalk's Hard Shoulder , Curtis explained she will never forget the moment she found out her baby was still alive.

She said the last thing she remembers before being put to sleep was a doctor telling her that if it came to it, they would prioritise her life over her baby’s.

"Basically, in a nutshell, back in March, I got Covid,” she said.

“I tested positive on a Saturday, by the Wednesday I was in Beaumont Hospital and on the next Saturday, I was rushed to ICU where I spent 17 nights in an induced coma on a ventilator at 21 weeks pregnant.

Laura Curtis was 21 weeks pregnant when she found herself in a coma with Covid and on a ventilator. She is telling @kierancuddihy her incredible story now on @NewstalkFM pic.twitter.com/ZbdIrthYPo

Curtis said the baby was all she was thinking about when she was first admitted to hospital.

END_OF_DOCUMENT_TOKEN_TO_BE_REPLACED

“They had one of those small monitors that they can check the belly to make sure the heartbeat is still there, so the nurse did that for me and she said yeah everything’s OK.

“They basically said to me, Laura you don’t really have an option because if you have clots on your lungs from Covid, never mind the baby, you won’t make it.

“Then it kind of got a bit real and when I was transferred to the high dependency unit because every oxygen machine they put me on wasn’t satisfying - it wasn’t helping me - so they kept improving my oxygen, kept putting me on bigger machines, higher doses and then I started to panic.” 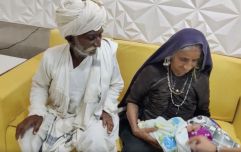 END_OF_DOCUMENT_TOKEN_TO_BE_REPLACED

Curtis explained her boyfriend was allowed into the hospital when they were taking her to ICU.

“The only thing I remember them saying to me was Laura, you’re 21 weeks pregnant, it is not a viable pregnancy until it is 24 weeks so, if I have to make the decision, I am going to try and save your life.

“I was put into an induced coma for 17 nights and that was the last conversation I had.”

Laura said that, when she woke up, she thought her baby was gone.

Today, baby Demi is four weeks old today and doing great. Curtis explained she wanted to tell her story to thank the doctors and nurses at Beaumont Hospital and the Rotunda Hospital.

“The people who cared for me were absolutely amazing and without them, myself and Demi my little girl wouldn’t be here,” she said.

“So yeah, I’m just very grateful to everyone who looked after me and just a word of warning that you can’t be too safe.”

popular
Late Late Show viewers are not happy with Ryan's questions for Billy Connolly
10 items from Zara for the perfect autumn capsule wardrobe
Friends actor James Michael Tyler has died, aged 59
Apparantly, there is one colour you should never wear at a job interview
Former detective chief says Brian Laundrie discovery is "strange"
9 of the best horror movies on Netflix this Halloween
15 brilliant stocking fillers we are picking up from Penneys before they sell out
You may also like
1 week ago
Woman gives birth to baby weighing over 14lbs in US
1 week ago
Man charged over death of woman shot by toddler during work Zoom call
1 week ago
Influencer charged with drugs trafficking after trying to board Dubai flight with cocaine
2 weeks ago
A March for Maternity protest is happening at the Dáil tomorrow
1 month ago
Mother reunited with daughter who was abducted in 2007
1 month ago
UK company adopts four-day work week so employees can focus on themselves
Next Page