This is pretty amazing.

A man has been hailed a hero after he scaled 4 storeys in order to save a toddler who was dangling from a balcony.

In a video which has now gone viral with more than 2 million views, the man climbs the building in Paris in under 30 seconds when he sees that no one can reach the little one.

According to Le Parisien, he clambered the building on rue Marx Dormoy in the 18th arrondissement of the French capital to help the child, as onlookers looked on in horror.

Hero saves a 4 year old boy hanging from a balcony in Paris. What a heroic action. pic.twitter.com/TSmgqRX5Io

When he finally got the child to safety, you can hear cheers and claps from the crowd beneathe.

Holy shit, this guy is amazing. What a hero. https://t.co/XVWbaULkFp pic.twitter.com/hHnF150XL5 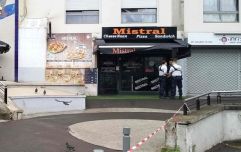 END_OF_DOCUMENT_TOKEN_TO_BE_REPLACED

Firefighters were then called to the building, and both the man and the child were treated for shock. Thankfully, the man only suffered from scratches and bruising from climbing the building.

Le Parisien report that the child was left unattended and made its way onto the balcony before getting stuck on one of the rails.

The hero has now been identified as Mamoudou Gassama, a 22-year-old originally from Mali but living in Paris.

Mcontext: he’s called Mamoudou Gassama, he’s 22, originally from Mali & scaled 4 storeys in 30 seconds to save that toddler in Paris pic.twitter.com/GbP0y1PpXA

popular
Love Island: Mollie's family issue apology following allergy comments
Woman dies in water park zip line accident in Brazil
Love Islanders will decide whether to recouple in Casa Amor TONIGHT
Love Island fans think someone has left after Luca arrives back to empty bed
Sunny weather set to return tomorrow with highs of 23 degrees
Penneys has a perfect dupe for Charlotte Tilbury's Flawless Filter foundation
Friends creator says they regret not using correct pronouns on the show
You may also like
1 month ago
You can now book to stay at the actual Moulin Rouge windmill on Airbnb
2 months ago
James Kavanagh and Holly Carpenter were arrested during a trip to Paris
6 months ago
Scenes from Emily in Paris you can visit in real life
10 months ago
Joséphine Baker to become first black woman buried in Paris's Panthéon
3 years ago
You are now able to zipline for free out of the Eiffel Tower
3 years ago
Five special places to visit next time you travel to Paris
Next Page